While gastro pubs have raised the bar for quality food and beer, many restaurants have been slow to embrace changing tastes when it comes to beer 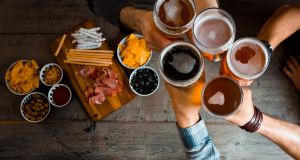 Fine dining is not just about wine anymore. “It’s become acceptable now to have a beer with your dinner.” Photograph: iStock

Provenance is a big theme in food these days, with many restaurant menus including details about locally grown vegetables or the names of farms where their meat or cheese was sourced. When it comes to beer, however, the approach can be a bit disappointing. Often, you’ll get a few beers tagged on at the end of a long and detailed wine list, stuck in like an afterthought beside the selection of Irish coffees and soft drinks. And the type of beer on offer is often the big-brand types – in bottles – or some sort of bland Italian lager.

There’s been a surge of microbreweries opening up around Ireland over the last number of years, buoyed along by the increasing interest in buying local. And while some gastro pubs – Mulligans, The Legal Eagle, 57 The Headline and Brickyard, among others – have raised the bar for quality food and beer, many restaurants have been slow to embrace the changing tastes and consumer demands when it comes to beer – though perhaps that’s slowly starting to change.

“It’s a very exciting time for beer, and the quality is phenomenal,” says Elaine Murphy, director of The Winding Stair group.

Beer has always been a strong part of their menus, Murphy says. “We were ahead of the crowd sourcing independent beers from around the world, when we first opened [The Winding Stair] in 2006 . . . We didn’t sell Guinness or any of the major breweries’ [products]. People thought we were so radical and completely weird.”

The drinks menu at The Winding Stair includes six Irish beers – Kinnegar, Trouble, the Porterhouse and others – while you’ll find more than 20 beers on tap at its sister restaurant and bar The Legal Eagle, while its pizzeria, Yarn, stocks both cans and bottles. “Bottles are always a big seller for us but the cans are great too – the design of the cans are so beautiful now it’s great to see them on the table.”

Murphy says she’s noticed a huge change in attitudes since they started out, with people becoming much more open to the idea of good beer with good food. “We’ve always been encouraging our customers to pair food with beer and cider.”

For Claire Dalton of Dungarvan Brewing Company, founded in 2010, the restaurant market has always been a key focus. “Restaurants have always been a strong side of our business, since the beginning,” she says. Dungarvan regularly hosts food and pairing events at the brewery, with its annual long-table event a highlight of the Indie Beer Week festival.

“Most restaurants in Dungarvan would stock our beer.”

Local produce and provenance really matter to customers now, she says, with good local beer falling into that category. Fine dining is not just about wine anymore, she says. “It’s become acceptable now to have a beer with your dinner.”

But what makes a good beer to pair with food? Dalton says its Copper Coast Red Ale is popular in restaurants. “It’s a good food beer and works well with meaty dishes. It’s an approachable beer but it’s not too heavily carbonated, which is good while eating.” Its Helvic Gold Blonde Ale has lots of citrussy flavours which works with shellfish but can also be used as a good “curry beer”.

Educating staff is a key part to having a good beer selection. “We always like to take the staff through the different beers, make sure they’ve tasted them so they can educate themselves,” says Dalton.

Murphy, of The Winding Stair, echoes this point: “It’s a lot to do with staff being really engaged and knowing the beers. Doing tastings in-house is really important too.” She suggests having one member of staff who really knows the beer list well, and having a staff visit to a brewery to “make a connection with the story of the beer”.

Emma Devlin of Rascals brewery in Dublin says its beers, which are exclusively in cans, seem to appeal more to burger joints and pizza restaurants, drawing a younger demographic. “The younger hip places have embraced it more than the traditional restaurants.”

“Restaurants is a very slowly opening market,” says Cuilan Loughnane of White Gypsy Brewery in Co Tipperary. One of the challenges is price, he says. Wines that are sold into restaurants are rarely, if ever, the same as ones you’ll find on supermarket shelves or in off-licenses, he explains, so the mark-up is less obvious. Not so with beer, however. “If you’re popular and you’re out there they [restaurants] don’t want to know you,” he says.

“You have to do something very different to get into restaurants,” adds Loughnane. “We thought, let’s create a strong ale in 750ml bottles that could potentially compete with wine.” They now make four beers in 750ml bottles that are sold exclusively to restaurants or select off-licenses, in addition to their other range of beers. Supplying the local market, in particular to pubs on draught, is their core market, he says. “Less than 5 per cent of our business is to restaurants.”

While their drinks menu is relatively small, Gray says, it’s quite selective. “We find that particularly because we stock Irish beers that really appeals to people.”

They’ve taken a novelty approach to beer with a help-yourself fridge, stocked with a range of bottles and cans from Rascals, Dot Brewing, Wicklow Wolf and others. It makes for a nice change from reading from a list on a menu. “So it’s like at home, looking in the fridge, you can look at the label of the beers, read about them or ask us.”