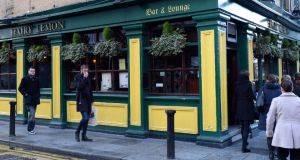 Well-known Dublin pub the Hairy Lemon was among a number of outlets served with food closure orders for breaches of food safety legislation by the Food Safety Authority of Ireland (FSAI) last month.

The basement area of the popular city centre nightspot was closed for two days from December 17th after it was identified by FSAI inspectors as posing a “grave and immediate danger to public health”, as is the criteria for closure notices.

Redz takeaway reopened following a 12-day closure, while the other two orders currently remain in effect.

Prohibition orders were also issued against L&M Store in Dundalk and Belmont Organic Venison in Westport, a product which prompted a food alert from the authority last month after inspectors discovered unhygienic practices at a packaging plant.

December’s figures for food closure orders and prohibition orders rounded off what was the second worst year for food outlet closures in the State since records began.

“While most food businesses follow high standards and are compliant with food safety legislation, we continue to encounter cases where consumers’ health is jeopardised through a lack of compliance,” said FSAI chief executive professor Alan Reilly.

“This is unacceptable and will be met with the full rigours of the law,” he added.

Some pubs are reopening. Here’s everything you need to know about how it will work
9