Another Round: Don’t make the mistake of overlooking one of our first craft breweries 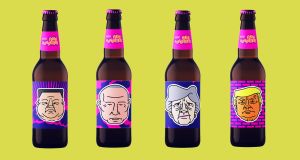 It has been there so long, sometimes you pass it by on the shelves in the search for something newer, more exciting from the latest craft brewery to set up. Big mistake: Galway Hooker Irish Pale Ale (as opposed to India Pale Ale) is a light, thirst-quenching beer, with fresh, zingy hops, a touch of malt and a crisp, dry finish. Perfect for a session, or with a cheese toastie.

Now based in Oranmore, Galway Hooker produces four other regular beers, as well as seasonal specials. “Is it getting easier?” I ask brewer and cofounder Aidan Murphy. “It has changed. When we launched, in 2006, practically every time we spoke to someone we had to explain the concept of craft beer and how it differs from other beer. Now it has turned on its head; everyone is familiar with the idea, the different styles and the various hops, so from that perspective it’s a lot easier,” he says.

“The difficulty these days is that the industrial brewers have latched on to it as well. It muddies the water and makes it difficult for people to work out what is a craft beer; they are wolves in sheep’s clothing. But overall things are buoyant; craft beer is a small percentage of market and will continue to grow.”

The aforementioned Irish Pale Ale is still the most popular. “It’s a beer people know and understand. They experiment and come back to it.”

The popular seasonal honey beer is still there also. “People really appreciate the local honey.” It has genuine Galway terroir, something brewers can struggle to get.

The latest release is Four Horsemen, a delicious cloudy, fruity session IPA that comes in a four-pack, featuring Kim Jong-un, Vladimir Putin, Teresa May and Donald Trump on its labels.

Wild foods: where to look and how to find them, wherever you live in Ireland
Real news has value SUBSCRIBE