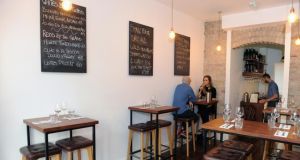 Clanbrassil House: Michelin says the Dublin restaurant’s menus “focus on the charcoal grill, with everything from homemade sausages to prime cuts”

Five restaurants in Ireland, four in the Republic and one in Northern Ireland, have been newly awarded Bib Gourmand status by the Michelin Guide Great Britain and Ireland. Bib Gourmands recognise establishments offering simple yet skillful cooking for under €40 (£28) for a three-course meal.

All but one of the 27 restaurants in Ireland with existing Bib Gourmand status retain the distinction in the 2019 guide, bringing to 31 the total on the island. Old Schoolhouse Inn, in Co Down, is not on the list for 2019. It closed as a restaurant in April but remains open for accommodation.

The Bib Gourmand awards were announced on Friday in a steady stream on the Michelin Twitter account.

It has been a massive learning experience, and I’m delighted to hear about the Bib Gourmand today

Clenaghans was commended for “skilfully prepared, appealingly unfussy, rustic dishes which are packed with flavour. It’s charming, characterful and run by a lovely team.”

Danni Barry, its chef, who earned a Michelin star in the 2017 guide for Eipic, in Belfast, left that kitchen 12 months ago to open Clenaghans in partnership with Stevie and Christina Higginson, but she resigned from the business earlier this month.

“Clenaghans is a beautiful restaurant and was a huge opportunity for me, so I jumped at it,” Barry, who was chef of the year 2017 in the Restaurants Association of Ireland awards, said. “However, the way we had set up the partnership didn’t really work, and I stood one day in what was supposed to be my first restaurant and it just didn’t feel like mine. I didn’t love it, and to put all that work in... There was just something missing. It has been a massive learning experience, and I’m delighted to hear about the Bib Gourmand today and wish the team all the best.”

At Clanbrassil House, in Dublin 8, where Grainne O’Keefe is head chef, the news was greeted “with delight” by the team. “It is an amazing achievement for being open less than a year,” O’Keefe said.

The Michelin inspectors described Clanbrassil House as a restaurant where you can “share dishes ‘family-style’. Menus focus on the charcoal grill, with everything from homemade sausages to prime cuts.”

“We are over the moon,” said Amanda Fahy, who runs Brownes, a pub restaurant in Tuam, Co Galway, with her chef husband, Stevie Lane. The couple were alerted to the news by a Twitter notification.

“We weren’t particularly targeting the Bib Gourmand, but it has always been a philosophy that we value really highly,” said Lane, who worked at the Pig’s Ear, Mulberry Garden and L’Ecrivain in Dublin before returning to his home town to open Brownes in October 2016.

Michelin said of Brownes: “The ingredients write the great value modern daily menu... It’s a sweet place run by a husband and wife and has been in the family for three generations.”

Dillon’s, in Timoleague in Co Cork, is a 25-seat restaurant in a former pub-cum-grocery run by Richard Milnes and Valeria Ventura. Milnes, who grew up in the area and trained at Cork Institute of Technology, took over the restaurant four years ago; he received a phone call from a fellow restaurateur alerting him to the news.

“We weren’t expecting it at all,” he said, recounting that he had been visited by an inspector earlier in the year. “It was one of the worst nights. We had just two tables booked, one for two, and one for one. But the restaurant filled up completely.” Milnes has his work cut out. “I am on my own in the kitchen, and I do the wash-up, too.”

Michelin commended Dillon’s for its “flavoursome dishes” that are “eye-catching in looks and make good use of local ingredients – some from their garden”.

The Irish Times columnist JP McMahon earns a Bib for Tartare, in Galway, “where delicious small plates feature top seasonal ingredients. It’s snug, intimate and endearing,” according to the guide.

“We’ve tried to bring something unique to Galway: small Irish plates focusing on local, organic and wild food,” said McMahon, who also owns the Michelin-starred Aniar, on the same street. “I never imagined we would win a Bib, and I’m delighted for the staff.”

The restaurant at Old Schoolhouse Inn closed in April of this year, but the family-owned business is still offering accommodation. Its chef-patron, William Brown, held the Bib for five years, having first won it at the age of 25. Brown and his parents took the decision to close in the spring of 2016. “I was enjoying it, but it was my time to move on.” He says he will open a brasserie and wine bar in Belfast city centre early next year.

The updated Michelin stars will be announced on Monday, October 1st, when the 2019 Michelin guide will be launched in London.

Read our pick of the 100 best restaurants, cafes and other places to eat in Ireland