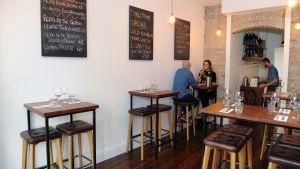 Dublin 8 may be reaching peak hipster. It seems so much longer than just a decade ago that D8 man lamented his hood, with shops that sold neither a loaf of sourdough nor a copy of the Guardian.

Instead, we had places like HC Hardware, where Peter, the owner, stocked everything from rat-traps to hot water bottles, much of it hung around him like aging hams from the ceiling. Peter kept eccentric hours, cutting keys and fixing locks when he was there and driving around in his two-seater sports car when he wasn’t. He was a salt-of-the-city sort, according to a neighbour who knew him.

Ten years of hipsterfication later, Peter’s shop is now Clanbrassil House. The name makes it sound like a big ball of a pub or somewhere you would go to tax your two-seater. But it’s a small ground-floor pair of (very different) rooms, coffee shop in size and restaurant in ambition. Clanbrassil House is Baby Bastible, the offspring of chef Barry Fitzgerald’s nearby South Circular Road restaurant, which won a Bib Gourmand just a few days before Clanbrassil House opened.

I’m a card-carrying fan of Bastible and shot like a rat up a drainpipe with an online booking when I heard the news. So we’re still in early-days territory. Bastible nailed it from its first day but the back room we’re in tonight has that new-house feel of stark walls, everything (me included) in need of seriously better lighting. The tables are so close it makes a Ryanair flight feel roomy. It might be time to ditch the illusion of separate tables and squeeze in a couple of shared ones so we could spread our elbows and get comfy.

And the food is good, some of it great, one dish a surprising clunker but I’m putting that down to it being early days

Table envy sets in after a trip to the front where it’s all candlelight and biscuity bare brick walls, fairy lights in the window and high stools. These are a mix of bookings and walk-ins, it seems, all part of the complicated economics of serving this standard of food with fewer covers than a working wedding band.

And the food is good, some of it great, one dish a surprising clunker but I’m putting that down to it being early days. As the baby of a bigger restaurant, Clanbrassil House feels fully-formed with a good wine list and a blokey menu, lots of dishes that could generally be described as gentlemen’s repasts. Head chef here is a young woman, Grainne O’Keefe, who has worked with Fitzgerald in Bastible, and in the kitchen at Pichet.

Not everything is meat. There’s a plate of beets, sweet but a touch watery, making for a colourful plate – summer sun stored in root vegetable form with clumps of fluffy Toonsbridge ricotta. The best thing is a silky walnut butter, which is finger-swirling good. Across the table is the dish of the night – grass green leeks pressed flat as ribbons, charred and topped with squares of crisp chicken skin with fronds of chervil on top for a fresh aniseed hit. They’re served in a puddle of diced, soft-boiled egg with a light vinaigrette to give the whole plate the feel of a very posh picnic.

There’s a Shorthorn steak, all smokey char outside and solidly chewy inside, Beefy McBeefington cow pie stuff. It comes with a log of bone filled with wobbly blobs of bone marrow that have to be lifted to the mouth with the steadiest of hands. It’s finished with a great fresh herb chimichurri that looks like the cud this animal once chewed. I’ll be back for the hash brown chips, fluffy potato mouthfuls with grated potato coats. They come with pickled onion mayonnaise that’s every dollop as good as it sounds.

My clunker is a lump of Middlewhite pig-cheek sausage. It’s hard to tell if the meat is good because the sausage is so salty. It sits on a bed of lentils with carrots and swedes diced so finely they’re the size of the lentils. Top marks for knife skills but I’m reaching to find any flavour. There’s a slick of mustard dropped on the lentils, making two jangling shouty things on a bed of insipid lentils rather than a gentler stewy meld of meat, vegetable and pulse.

Desserts are lovely, a plate of spoon-sucking chocolate mousse with house honeycomb and a marmalade ice cream, an early hit of Terry’s Chocolate Orange in dessert form. My damson sorbet keeps the flavour of the fruit but adds the right amount of fizzy sherbet pleasure to it.

Clanbrassil House (salty sausage and a room that needs a rethink aside) is a another great addition to a neighbourhood that has grown its food culture from the ground up. I like how this has started and think it could go in a very interesting direction. We need more restaurants for women chefs to shine. As soon as this place finds its groove we’ll have gotten ourselves another city favourite.

Music:
Great. Soundtrack of our generation.