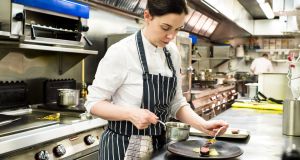 Danni Barry, the only female chef in Ireland to have a Michelin star, has been named Best Chef 2017 at the Restaurant Association of Ireland (RAI) awards.

The 31-year-old, from Mayobridge, Co Down, is head chef at Deanes Eipic in Belfast. She previously worked with UK chef Simon Rogan at L’Enclume , as well as running the kitchen at Rogan & Co in Cartmel.

Chapter One in Dublin, owned by chef Ross Lewis, was named Best Restaurant at the awards, which were attended by restaurateurs, front of house and kitchen staff, at the Clayton Hotel in Dublin 4 on Monday night.

Six chefs, all previous winners of the regional titles, plus a representative of the hotel hosting the event, were each responsible for one course at the awards banquet, served to more than 900 industry figures.

Last week, the RAI came in for criticism for having no women on the panel chosen to cook at the event. The imbalance was highlighted by Athrú, the movement founded last year to empower women in the culinary arts and address gender imbalance in the industry in Ireland.

A planned protest at the awards ceremony, intended “to highlight the fact that we reject the all-male panel”, according to Athrú co-founder Hilary O’Hagan Brennan, was averted late last week. The group will now meet with representatives of the RAI to discuss the issue.

The Local Food Hero for 2017 was awarded to Michael Kelly, founder of the Grow It Yourself movement and the driving force behind the GROW headquarters in Waterford.

A new award, for Pub of the Year, was won by Morrissey’s of Co Laois, with Best Gastro Pub going to Walled City Brewery, Co Derry.

All -Ireland – Chapter One, Dublin

Pub of the Year

All -Ireland – The Dining Room at Gregans Castle Hotel, Clare

Dublin – The Saddle Room at The Shelbourne Hotel, Dublin

Connaught – Wildes at the Lodge, Mayo

All -Ireland – The Maigue Restaurant at Dunraven Arms Hotel, Limerick

All -Ireland – The Muddlers Club, Antrim

Dublin – Meet Me in the Morning, Dublin

Paul Flynn: ‘Cook these comfort dishes, rub your bellies and think of me’