Black, short or whatever way you like your coffee, the world of beans and baristas has become a lot more sophisticated 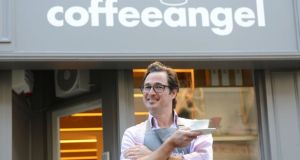 I ’m standing in a small room off the Lisbon Road in Belfast and about to cup. My host, Hugh Gilmartin from Specialist Beverages, says we are ready to go. Cupping involves accessing the aroma and then tasting. Eight coffees later and I am staggered. Coffee is something most of us consider a constant in our lives, yet I have moved through aromas of ash and smouldering tyres, tobacco, flowers, chocolate and orange. I’ve tasted elegance and beauty (I kid you not); been seduced by rich and voluptuous and I am reeling. “Now that,” Gilmartin says with a smile, “is coffee.”

Two weeks later Colin Harmon of 3FE in Dublin opens a sachet of Bolivia Finca Loayza Feliciano Ramos. “I love Bolivian coffees,” he says. “At first they seem obvious – rich and full bodied, full of the chocolate-toffee notes we associate with coffee – and then they come through with all sorts of stuff; berries and cherries, a wildness that is just so exciting.”

Both men will talk about coffee all day and luckily we are getting to hear rather a lot more from them. 3FE has spawned a host of serious cafes and Specialist Beverages has just launched into Dublin at Hatch and Sons (which I need to declare myself a shareholder in).

For those who can remember, there is not, at least initially, much that is new about this so-called cutting-edge coffee trend. My parents bought coffee from Bewley’s in bean form and had it ground to order, depending on the machine. Later they bought beans and ground at home.

There are, however, some significant differences and the primary change is in focusing not on the brand, not even on the coffee, but the bean.

El Salvador is one of the most exciting regions for coffee at the moment, according to Gilmartin. Having been shut out of the world markets during various wars, its coffee varieties remained largely unchanged, while elsewhere higher yielding and more uniform varieties were grown. The result is that individual and interesting beans are finding their way from the ground and into people’s cups. This is an illustration of a fundamental change in the coffee world.

So how do we negotiate this new relationship with beans and espressos? Our love of all things Italian has meant that the world of coffee has for years been dominated by the thick, inky shot made from water forced through ground beans to produce a crema-laden syrup. Purists drink the short shot, most have it fashioned into cappuccinos, lattes and, latterly, the flat white. The idea is to produce a uniform and constant coffee hit. But coffee, as Gilmartin has pointed out, is a hugely variable crop. Why, he asks, do we want to make it all the same?

We’ve had the cafe revolution. Now we are evolving beyond that to focus on really, really interesting coffee. For Harmon this means a fundamental shift from drinking to tasting.

As in an old coffee house, the idea of what is in the cup becomes paramount. His big breakthrough was supplying Fallon and Byrne in Dublin. Hundreds of people were saying not only that the coffee was fabulous, it was so very different to what they could get elsewhere.

This conversion of the “ordinary punter” is key to spreading the word, according to Gilmartin. It’s the thrill of seeing excellence recognised. “Somebody comes in for a coffee and they go, wow, that really is something special’. If they are interested there is a world to explore. If they just want to have something delicious and recognise it as being something special then that is also fantastic. So you can enjoy the revolution at lots of different levels.”

For those keen to explore, however, there is only one way to go and that is with filter coffee. The trouble is that it is not easy. It’s not difficult either, but you need to pay attention, says Karl Purdy of Coffeeangel (currently in South Anne Street, Dublin, but soon to be appearing in Pembroke Street). Purdy has just injected 200g of water from a water tower he is testing from Dublin-based boiler company Marco. It hits the coffee at precisely 92 degrees. “The three Ts,” he mutters quietly, “time, temperature and turbulence.”

He has measured the coffee out on digital scales, has an electronic timer on the go and is weighing the water. He has made more coffees than anyone I know, yet he still uses the kit. His explanation reveals the huge variables; from water to grind you need to extract only the right amount. Too much or too little and the result borders on undrinkable or insipid.

Coffee is a fresh-crop product which means it is seasonal and open to the vagaries of the weather leading to considerable variations in quality and flavour. Added to this, many coffee-producing countries have variable military-political environments which can make access to the crop difficult at times.

Ideally, you want the green beans close to the harvest so they are processed without delay but with enough time to allow for the crucial fermentation to take place. Once roasted, the bean will start to deteriorate slightly, so you want a roasting date on the packet. Some supermarket or branded coffees can be several years old. Once ground you want to make your coffee immediately. Which is why some top restaurants – often put off by the noise of grinders – don’t, or won’t, serve particularly good coffee.

Filter coffee is subtle, like Burgundy in wine, or watercolours in painting. You don’t drink it with milk or sugar; both overpower the subtleties. Not tried coffee without milk before? Give yourself a week. It’s all it takes to ditch milk in tea and coffee and open up a whole new world of flavours.

Buyers have pulled out of a property we were underbidders on, can we avail of their survey before buying?
3