The mysteries of the universe in a can

Beerista: Appearance affects taste – so what happens if you don’t look? Two Irish beers are put to the test 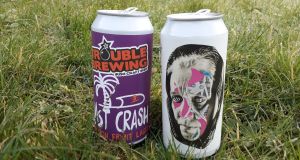 One of the world’s most raved-about beers comes with clear instructions to “drink from the can”. Heady Topper, by The Alchemist brewery in Vermont in the US, usually sells out within minutes of its limited production run and has been rated fifth-best beer in the world – but not because of its looks. It’s a murky, yellowy double IPA, and the makers cleverly advise consuming from the can so the taste gets all of the drinker’s attention.

While Heady Topper was one of the first of the cloudy North Eastern IPA style to hit the market, over the years fans of craft beer have become less bothered about murkiness. But it’s interesting to consider how much the look of something impacts on taste. When you think about it, there are not many things that we eat or drink without looking at them – perhaps a coffee sipped from a takeaway cup, or a soft drink.

I picked up two big cans – or tall boys as they’re sometimes called – to conduct a kind of taste-only experiment by sampling without pouring into a glass.

First up is Trouble Brewing’s Last Crash Passion Fruit Lager. This has a light, delicate aroma with a little bit of passion fruit and graininess, though it’s hard to get much aroma from the small opening at the top of a can. There’s a solid fruity character to this beer which plays nicely off the light lager base, and it finishes with a good tart bitterness. At 4.9 per cent, I could imagine sipping away happily on this at a summertime festival.

Bone Machine IPA by Whiplash has a hoppy, grassy aroma with touch of sweet orange. There’s an old-school piney flavour to this beer, with a dank, assertive bitterness, but it’s light-bodied for a 6.2 per cent beer.

Both of these beers stand up well on taste alone – but would seeing them have changed their taste? Ask Schrödinger.