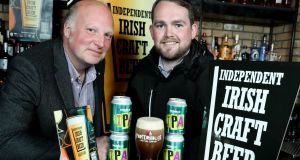 Peter Mosley and Elliot Hughes of Porterhouse Brewing Company, whose Around the Clock Imperial Stout was voted beer of the year by the Independent Craft Brewers of Ireland.

The idea for the competition was simple: each craft brewer put forward the beer they felt best represents them, to be judged blind by their peers. The 20 competing brewers were each sent a case of numbered cans and bottles and asked to nominate their favourites. There are obvious limitations to a competition like this: a brewery could only put forward one beer, and there were no separate categories for each style of beer. However, happily, the organisers agreed to send me the beers too, so that I could conduct my own private competition.

If the entries are anything to go by, many of our craft brewers see themselves as stout specialists; no less than seven out of 20 samples were of the black stuff. These were no ordinary stouts though; most were higher strength imperial and foreign extra beers, alongside a fascinating sweet pastry-stout. As well as the stouts, there was a raspberry and chilli sour beer, a bock, several saisons, and various American, brown, golden, Indian and Irish pale ales.

The overall winner was Porterhouse with their Around the Clock Imperial Stout, a rich, powerful (12 per cent) beer with masses of dark chocolate, toasted malt and roast coffee. Apparently it was aged in used Dingle Whiskey casks for 180 days.

In bronze position – and counting as my favourite – was the Kinnegar Thumper Double India Pale Ale, replete with hops and a well-hidden 7.8 per cent alcohol level.

I was also very taken with the tropical Far Side Hazy IPA from 12 Acres, a beer I featured last year, and the crisp, thirst-quenching, intensely hoppy Hope American Pale Ale.

Let us hope 2021 will allow for an expanded version of the competition.