Take it home: an Irish red ale and a South African Chenin Blanc 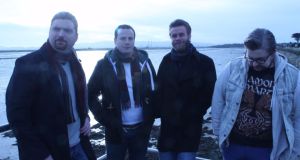 Brian Murphy and Simon Browne work in McHugh’s Off-licence on the Kilbarrack Road. McHugh’s were one of the very first shops to champion real beer, initially from abroad, and then Ireland when craft brewing took off. Not surprisingly they have one of the finest selections around, and an avid group of customers. One day, the pair were approached by one such customer, Andrew Bourke, ‘He had just finished his MBA’, says Murphy, ‘and he fancied the idea of setting up his own business. He asked himself ‘what do I like?’ and Who knows about it?’. And so he came to us’.

‘That was two years ago’, says Murphy; ‘we started over and over again, experimenting. We decided to take a serious approach to a red Irish ale.  Some craft brewers just put together something red and hoppy. We saw a market for a traditional red ale with a difference’. The result was The Pilgrim Irish Red Ale. ‘We have been going seven months now and are struggling to meet demand. We got amazing support from McHughs, the owner, the staff and the customers. They now have nationwide distribution and have been listed in O’Briens.

At the moment they contract brew at the Independent Brewery in Galway with one of the team going down on brew day. They released a second beer, Raven’s rye ale, just before Christmas, and that sold out very quickly. ‘We will release a new batch this week, a lower in alcohol to make it sessionable’. The Wood Key Red Ale is a very nicely crafted easy-drinking red ale that still has a plenty of character, with an appealing smoothness lifted by a light hoppy tang.  A very good session beer.

Chenin Blanc is the greatest chameleon grape of them all, happy to be made into sparkling sweet or dry white wine. In its home territory of the Loire Valley, you will find it in every style and in all its wonderful glory. But today we are in South Africa the only New World country to have significant quantities of Chenin Blanc. At one stage it made up a third of all vines planted. Familiarity seemed to have bred contempt, as for many years South African winemakers seemed completely uninterested in Chenin.

This has changed over the last decade; you can now find some seriously good examples. You may come across the odd sweet wine but the vast majority are dry, ranging from light and crisp to rich and textured. Today’s wine falls into the former category, a big smiling mouthful of wine, refreshing and attractively fruity with a snappy dry finish. Perfect to sip on its own or with lighter fish and chicken dishes.

Buy yourself a dream... with the planning headaches sorted
5