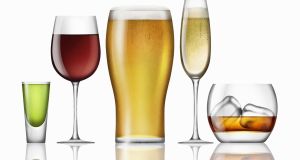 Does gin really make us maudlin and weepy? Does whiskey make us aggressive? A new international study has looked at how the three broad groupings of alcoholic drink (spirits, wine and beer) differ in how we respond emotionally to them.

The study, published on November 21st, surveyed 30,000 people in 21 different countries. The researchers hope their findings will make people think more carefully about what type of alcohol they consume.

However, those were just the positive emotions expressed. The drinkers also recorded negative emotions. Spirits were blamed for feelings of aggression, depression and tearfulness. Wine and beer didn’t give the same temporary “buzz” that spirits did and ultimately left drinkers feeling tired. Beer was also found to be the drink that was “least sexy”.

The co-author of the study, Alisha Davies, who works in Public Health Wales NHS Trust, says the positive emotions generated by some types of alcohol may be down to how the drink in question is marketed: “There is plenty of promotional material, through advertising, to promote the positive emotions people might look for from drinking” she says.

“But we thought it was also important to better understand the negative ones as well. If we are to help people make informed decisions about their drinking, they need to know the full picture of how alcohol affects moods and emotions.”

What is clear from the study is how spirits provoke both strong positive and negative emotions. More than 59 per cent of respondents reported feelings of confidence after a drink of spirits, with 58 per cent also reporting feeling energised and 42 per cent “feeling sexy”. But 48 per cent reported that drinking spirits made them feel ill, 33 per cent said it provoked aggression, and 22 per cent said spirits made them maudlin and tearful.

Beer was more straightforward, with half of all beer drinkers reporting feelings of relaxation (second only to red wine overall). The drink’s perceived lack of sophistication saw only 19 per cent of responders “feeling sexy” while drinking it. More than double that amount (39 per cent) said it made them sleepy. But top of the soporific charts was red wine; 60 per cent said it made them feel tired.

From a public order perspective, you can contrast the study’s finding that while spirits made 33 per cent of drinkers feel aggressive, only 7 per cent of beer drinkers and 3 per cent of wine drinkers reported aggressiveness.

Spirits also made more than twice as many people feel ill as any of the other forms of alcohol.

As Davies points out, we have “a complex emotive relationship with alcohol”. The clearest message from the study is that while respondents reported positive emotions of confidence, energy and sexiness, the negative emotions of feeling ill, aggressive and tearful followed straight behind.

In the mood for a drink?

What percentages of people experienced these emotions from different drinks?

It makes me feel relaxed

It makes me feel aggressive

It makes me feel confident and sexy