After three years and countless tastings, my lupulin threshold has changed forever

Beerista: I’m bowing out, with a fond farewell to Ireland’s thriving independent brewers 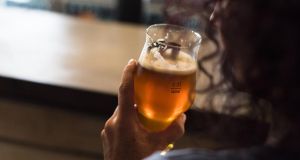 Beerista: in three years of brewery visits I’ve sampled too many beers to count. Photograph: E+/iStock/Getty

When I visited the Mescan brewery, in Co Mayo, a few years back, they described themselves as the Galapagos Islands of brewing. Situated in the foothills of Croagh Patrick, this small and hard-working enterprise felt wonderfully far away from the world of industrialised, mainstream beer. It also seemed very far away from the perception of craft beer at that time – in 2016 – when it was often dismissed as a fad.

A few weeks earlier I had spoken to Oliver Hughes, the late Porterhouse founder. He described how “nobody knew what hops were” in 1996, when they started up. Sitting at the window, in the Porterhouse in Temple Bar, he said people thought they were “complete eccentrics” setting up a brewpub, serving their own beers, and how good it felt to be celebrating their 20th anniversary.

He also spoke about the challenges of going up against big brands, how the drinking habits of Irish people were slowly starting to change, and how supporting other Irish microbreweries was key to their vision.

In the years since then I’ve looked into many stainless steel tanks, trodden the sloped floors of breweries around Ireland – from Canvas, in Tipperary, and Clare’s Burren Brewery, to the Rascals taproom in Inchicore, in Dublin – and sampled too many beers to count. (I’m also guessing my lupulin threshold – or bitterness tolerance – has been permanently altered.)

I’ve had some very insightful chats with brewers and been blown away by their creativity and innovation, and by the dedicated and supportive ethos of the Irish microbrewing world. From what I can see, we’ve got a thriving and top-quality independent brewing scene.

After three brilliant years, however, it’s time to say goodbye – but you’ll still find me at many of the great craft-beer bars and festivals around Ireland, trying to decide which IPA to have next.