Domini Kemp: How to keep everyone happy

If you don’t want to cook separate meals for everyone, you need to find some hits 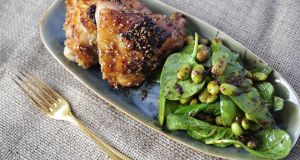 Feeding the masses, as Jesus knew all too well, was no walk in the park. But while He was lucky enough to have miraculous powers that could produce loaves and fishes by the dozen, we mere mortals have a bit more work on our hands. Setting aside the food businesses I run with my sister, I happily don’t have to feed the masses too often, but feeding a family can sometimes feel very much like the same thing.

It’s the world in microcosm: there’s usually one fussy one, one who will eat everything, another who won’t touch anything that isn’t white, and maybe a coeliac or nut allergic to boot. Easy, it ain’t.

It can be hard to please everyone, but I do try, mainly because I’m so reluctant to cook more than one meal for my lot. Most of the time that’s just asking too much.

As in Spanish or Italian households, here the young ones eat what we eat, or some version or part of it.

That way I can save time and heartache, as anyone who has ever experienced the family dinner table as a battlefield will know.

One important weapon in my home-cooking arsenal is a rigid policy around leftovers. I nearly always cook more of something than I need for one meal, especially if it keeps well, tastes nicer the next day (stews and curries) or is something that requires long cooking, like a slow roast.

Most food will last a few days in the fridge and far longer in the freezer, so if I fancy eating something I know the kids will turn their noses up at, then I can just tuck into leftovers or, if I remember, take dinner out of the freezer that morning or even the night before.

But there are some dishes I cook which I can be certain will be a hit with everyone, and many of them feature chicken. Like some cartoons – the new Irish-made version of Danger Mouse springs to mind – chicken has broad appeal. Kids love it, adults love it. Which is why, in my house, it often appears weekly.

Chicken is a wonderful carrier of flavours, being essentially quite bland on its own. Asian flavours in particular work well, as in this dish of marinated, charred chicken, which my kids love.

The accompanying salad of edamame beans (from the freezer) and sugar snaps, is relatively child-friendly, but feel free to replace it with broccoli, or ditch the spinach. Whatever else you fancy, as long as it’s green.