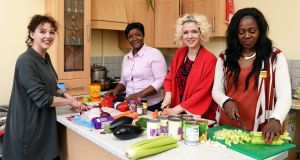 This month marks 16 years since a temporary measure for housing asylum seekers became the long-term limbo thousands of people have been channelled through in Ireland. What is known as direct provision houses asylum seekers indefinitely in this country. Initially intended as a stopgap before people’s asylum application cases were heard, it has become embedded in towns and cities across Ireland where, largely behind closed doors, adults live on a weekly allowance of €19.10 and children get €9.60.

Government figures from September 27th, 2015 show that 4,811 people were living in direct provision on that date, with some 55,091 having been accommodated since April 2000.

7 The outlook for vaccination is better than it seems

8 Addicted to Diet Coke: My battle to beat a 27-year, seven-a-day habit

15 Hotel isolation for 20 states excludes US, UK where cases ‘rampant’

16 Northern Ireland protocol: Unionism shoots itself in the foot

18 The Path Ahead: Full facts from Nphet paint stark picture

19 Tennis’ uncomfortable truth: Djokovic might be greatest of them all

27 Enda McDonagh obituary: A theologian scholar with a towering intellect

30 Northern census should bring some clarity to Border poll debate

31 Teenage boy raped cousin after forcing her to watch pornography

33 Stocktake: Is a market correction looming?

35 ‘An accident is not a crime’: Tiger Woods will not face charges in crash

39 North’s status under Belfast Agreement is an inconvenient truth