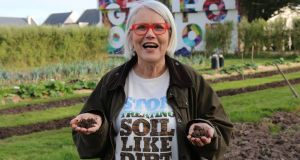 Stop treating our soil like dirt is the message behind a campaign being supported by Darina Allen of the Ballymaloe Cookery School, TV presenter and environmentalist Duncan Stewart and Green Party TD Catherine Martin, which aims to raise awareness of the dangers posed to Irish soils through pesticide uses, afforestation, erosion, urbanisation and overgrazing.

“Each and every one of us totally depends the four or five inches of soil around the globe for our very existence. Remember, if we don’t have rich and fertile soil, we won’t have good food and we won’t have clean water,” Allen told a meeting in Dublin on Wednesday.

A social media campaign #Selfie4Soil was launched at the meeting by Environmental Pillar, which represents 26 Irish environmental organisations, to boost public awareness of the People4Soil campaign.

The Pillar is asking Irish people to sign People4Soil’s European Citizens’ Initiative petition, calling on the European Commission to pass a soil directive, obliging member countries to protect their soil in the way that air, water and natural habitats are protected

Ireland is tasked with contributing 8,000 signatures to the petition, with a total of 1 million signatures, from at least seven member States being required for it to be passed.

Klaus Laitenberger, People4Soil Ireland spokesman, said: “The initiative strives to reach people that care about issues affecting soil and want to conserve this invaluable and essentially non-renewable resource that we’re plundering on an unimaginable scale.

“The biggest threat we face as a human species is the decline in soil fertility. We are losing soil at a massive rate and won’t have enough soil left to feed the growing world population if we continue to farm the way we do it.

“We have to act quickly as the cost of soil degradation is $10.6 trillion, or 17 per cent of global gross GDP. That’s quite a waste. We have to stop taking soil for granted and start seeing it as a resource that’s valuable.”

The Dublin meeting was organised to coincide with Earth Day on Saturday, April 22nd. Earth Day marks the anniversary of the start of the environmental movement in 1970.