Can’t cook, won’t cook? You can order options from turkey and ham to a seafood feast 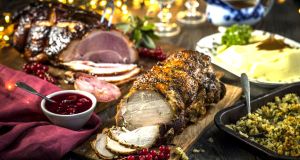 If you could, would you hand over the Christmas dinner prep to someone else, a professional maybe? Or does the sight of a plump turkey, a glistening ham and perky sprouts make you want to get cooking straight away?

Either way, Christmas is different this year, as we keep being told. So whether you’ve come down with culinary fatigue or don’t want to deal with the shopping queues, here’s how to get a delicious Christmas dinner delivered (or collected).

Also to come in this series: Suppliers that provide everything you need to cook Christmas dinner at home, without heading to the shops, and specialist hampers for the little extras that make Christmas dinner special

Poulet Bonne Femme
Dublin, Rathcoole, Kilmacanogue and Dunboyne, pouletbonnefemme.com
The original Irish chicken rotisserie specialists, this family-owned firm is offering a Christmas feast, with boned and rolled free range bronze turkey, honey roast ham, potato gratin, red cabbage, root veg, stuffing and sauces, along with a plum pudding and sourdough bread for the next-day-sandwiches, for €270. It will serve eight to 10 people and can be collected, or delivered within 7km of its outlets in Avoca stores in Suffolk Street and Monkstown, Rathcoole, Kilmacanogue and Dunboyne. Each component can also be bought individually.

Sustainable Seafood Ireland
Dublin, sustainableseafood.ie
Christmas dinner doesn’t need to have a bird of some sort as its centrepiece. Keep an eye on Sustainable Seafood Ireland’s website for the launch of an extensive Christmas menu, including collaborations with Karl Whelan of Hang Dai. Whelan’s classical training is to the fore in the lobster thermidor and wild sea bass en croute. But for something a bit more adventurous, you could opt for the scene-stealing whole boned and rolled organic Irish salmon with Persian stuffing.

Asador|Prado at Home
Dublin, asador.ie
The turkey crown in the Asadaor|Prado Christmas roast box gets sealed on the asador grill to add flavour and it comes with a honey glazed ham, carrots and parsnips, duck fat roasties, sprouts, stuffing, gravy and cranberry sauce. It serves four to six people and costs €99, click and collect and delivery on request. You can add a Christmas cocktail box to your order too.

Richard Corrigan’s Christmas Day Hamper
Virginia Park Lodge, Virginia, Co Cavan, virginiaparklodge.com
Chef Richard Corrigan and his family have poured heart and soul into these six-person festive feasts that have a turkey wellington as their centrepiece. You’ll also get a glazed ham hock, all the sides and sauces, smoked salmon, beetroot and goat’s cheese salad, Christmas pudding and mince pies, presented in a wicker hamper. Lots of the produce comes from the kitchen garden at Virginia Park Lodge that also supplies Corrigan’s London restaurants. They cost €275 and must be ordered by 6pm on December 17th, for collection on December 23rd and 24th, or delivery for an extra €10 in Cavan, Meath and Dublin.

The Butler’s Pantry
Dublin, thebutlerspantry.ie
No matter where you live in Ireland, you can have a traditional three-course Christmas dinner delivered by The Butler’s Pantry. The smoked salmon, turkey and bacon, dessert and cheese boxes to serve eight-10 people cost €385, plus delivery, and there is also a two-person version for €79. Orders can be placed online or at any of the 10 branches of The Butler’s Pantry in Dublin, with a closing date of Sunday, December 13th at noon.

Thanks Plants
thanksplants.co
Vegans get to enjoy a special Christmas dinner too with the Christmas Feast Box (€49) from Thanks Plants which contains a centrepiece roast made with mushrooms, chestnuts, cranberries, cannellini beans and vegetables, along with gravy and three types of sausages. Thanks Plants founder Aisling Cullen suggests basting the roast occasionally while it is cooking with a glaze that is one part maple syrup, one part olive oil and one part soya sauce. You can also buy the roast on its own for €19.95 and it will serve up to five people.

Hugo’s
Dublin, hugos.ie
Gina Murphy’s restaurant on St Stephen’s Green will prepare a full Christmas turkey dinner, for collection from the restaurant on December 23rd or 24th. The menu includes Ballycotton smoked salmon, potato salad and brown bread; spiced beef with horseradish creme fraiche; butternut squash soup; stuffed turkey breast with all the sides; Christmas pudding, mince pies and chocolate brownies, and a cheese board wth crackers and chutney. The cost is a very reasonable €110 for two, and there are also beef and duck options.

Donnybrook Fair
Dublin, donnybrookfair.ie
If you really can’t wait to enjoy your first turkey dinner of the season, Donnybrook Fair’s Christmas in a Box is available from December 14th. It’s a traditional offering with smoked salmon, soup, turkey and ham with all the usual sides, plus plum pudding and mince pies, with a cheeseboard to finish. It serves eight-10 people and costs €245.

Mise en Place
Kilkenny, miseenplace.ie
Nora O’Malley and Rob Cowley’s Mise en Place catering company has been in business in Kilkenny for 16 years. The pair, who both had senior positions in professional hotel kitchens before setting up their company, had to rethink their offering during the pandemic, and on July 1st Shop @ Mise en Place opened, offering ready meals, salads, quiches, soups, pies and pastries to go. Their Christmas listings include a mixed canape box that would be great with drinks (50 pieces for €75), as well as seasonal starters and sides and a selection of desserts that goes way beyond mince pies and plum pudding. Orders can be placed by telephone on 056-7702936 and opening hours for collection are 10am-4pm, Monday to Friday.

Avoca
Kilmacanogue, Rathcoole, Dunboyne, Powerscourt, Monkstown, Malahide, Mount Usher and Ballsbridge, avoca.com
The Avoca Christmas food offering is very comprehensive, with everything from party food (yes, you can still have a party, even if it’s a small one), to starters, main courses to reheat, turkeys, geese and ducks to cook from scratch, and of course puddings and cakes. Orders can be placed by telephone or in person.

Sage
Midleton, Co Cork, sagerestaurant.ie
Christmas dinner  can be collected from Sage on December 23rd and 24th. There will be a choice of three starters: Langoustine prawn cocktail, duck liver pâté, or goat's cheese and spiced beetroot parfait, with a children’s option of cheese croquettes. Main course is turkey and ham with duck fat roast potatoes, cranberry sauce, root vegetables, Brussels sprouts, chicken gravy, potato and bread stuffing, with half portions available for children. Dessert is a choice between Christmas pudding, whiskey trifle or baked cheesecake. It can be ordered per person or in a family-sized portions.

Michael’s
Co Dublin, michaels.ie
The Mount Merrion restaurant is planning to offer a choice of turkey crown ballantine, confit lamb shoulder, slow roast duck, daube of Dexter beef, or butter roasted wild Irish fish, with organic vegetables, sauces, and bread for the next day sandwiches. There’ll be a little bit of reheating required, but otherwise the boxes will come ready to eat and with enough food to serve four adults, €39.90 per person. Starters and desserts can be added. The Christmas click and collect goes on sale on December 1st and and collection will be from either Mount Merrion or Sutton.

The Twelve
Barna, Galway, thetwelvehotel.ie
The team at The Twelve embraced click and collect early on in lockdown and have honed their offering over the subsequent weeks and months. As well as a traditional turkey and ham dinner box, which can be ordered right up until December 21st, for collection Christmas Eve, they are also doing turkey and ham hock wellington in two sizes - €46 to serve two and €86 for four - and it comes with all the trimmings as well as a bottle of mulled wine. Ham joints smoked over Alder wood can also be pre-ordered.

Forest Avenue
Dublin 4, forestavenuerestaurant.ie
The Forest Avenue Christmas dinner box (€200, serves four) kicks off with house-made bread, with chicken liver parfait, potted crab and smoked salmon, sausage rolls, organic leaves with hazelnut and Cabernet Sauvignon dressing. A velouté follows, and for the main course there is a choice of goose or Chateaubriand, both with sauces, potato gratin, roast carrots and parsnips, celeriac with truffle crumb, buttered cabbage and thyme stuffing. Dessert is apple and mince pie crumble tart with brandy custard. Available to preorder now and collect between December 21st and 23rd.