Some have been overwhelmed with calls; others have struggled with social distancing 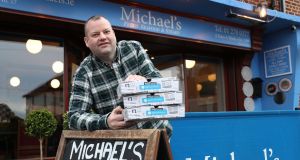 Flooded with calls: ‘By yesterday we had it nailed, and feedback on the food was great. But people were getting frustrated that they couldn’t get through on the phone,’ says Gaz Smith of Michael’s of Mount Merrion. Photograph: Nick Bradshaw

Demand for takeaway food soared over the weekend, causing problems for some of the restaurants that have turned to offering meals for collection and delivery in order to keep their businesses alive during the coronavirus outbreak.

In some instances food supplies ran out earlier than expected and customers faced long waits to place orders by telephone. Concerns were also raised about compliance with public-safety guidelines on social distancing as people queued to order and collect food.

As a result, several high-profile operators, including Gaz Smith of Michael’s in Mount Merrion, in south Co Dublin, and Michael Sheary of BuJo, in Sandymount in Dublin, have decided to scrap their takeaway services. “BuJo closed last night at 8pm. Our final act will be preparing 140 meals for front-line staff of our public services, courtesy of the Feed the Heroes initiative,” Sheary says.

We got it wrong, I’ll admit. We just got swamped. We had a disaster because people just turned up when they couldn’t get through on the phone

At Nightmarket in Ranelagh, online ordering had to be suspended for periods on Saturday and Sunday because of high demand, and the situation there is now under review. “We are going to have a look at everything and decide with our staff,” says co-owner Conor Sexton.

On Saturday morning Sean Collender’s group of three Indian restaurants, Kinara in Clontarf, Kinara Kitchen in Ranelagh and Kajjal in Malahide, apologised online for delays with takeaways and issues with customers being unable to place orders.

One customer contacted The Irish Times to describe his experience of collecting his pre-ordered takeaway at Kajjal on Friday night . “It was chaos and a blatant disregard for public-health guidance in respect of Covid-19,” he says.

“We got it wrong, I’ll admit. We just got swamped,” Collender says in response. “We had a disaster because people just turned up when they couldn’t get through on the phone.”

The restaurant group, which Collender says processed 2,500 takeaway orders in its three branches between Monday and Sunday of last week, has since put in place improved systems that “are working very well now”, Collender says. He intends to continue to offer takeaway, for the time being. “But it’s day by day at the moment.”

Riba, a neighbourhood restaurant in Stillorgan, in south Co Dublin, that launched a no-contact delivery service on Friday night, also had difficulty keeping up with demand. “We experienced unprecedented support this weekend. In the main it was a success, however we did let some customers down at peak times,” says restaurant manager Shane Molony. “This is a steep learning curve, and we are working on improving our service and further developing software solutions while allowing us to maintain social-distancing guidelines with a limited team.”

In Mount Merrion, Gaz Smith launched his call-and-collect takeaway menu last Tuesday. With a small core team in the kitchen, and no public access to the restaurant, he processed between 40 and 45 orders, or about 150 dishes, each day over the weekend.

It was getting harder to watch the scenes unfolding from places that were not enforcing social distancing, and it started to feel like we were condoning that

“By yesterday we had it nailed, and feedback on the food was great. But people were getting frustrated that they couldn’t get through on the phone,” Smith says. “We took three orders at a time, then put the phone on airplane mode. When they had been cooked and collected, we put the phone back on and took another three or four. That was the only way I could do it in good conscience.”

Smith was also uncomfortable social-media depictions of food outlets where social distancing was an issue. “It was getting harder to watch the scenes unfolding from places that were not enforcing social distancing, and it started to feel like we were condoning that.”

According to Adrian Cummins, chief executive of the Restaurants Association of Ireland, restaurants are within their rights to open as things stand. “We are taking our advice from the Chief Medical Officer, and until he decides to close all restaurants and cafes, it is the right of the owner to operate their business, in accordance with social-distancing guidelines.

“Our position is very clear: if a restaurant can operate a home delivery or takeaway safely, this is acceptable. But we want to be clear: if you can’t operate a two-metre social-distancing policy within your business, then it is impossible to trade. We need to protect our workforce and our customers’ welfare.”

Is it a good idea to move in with my partner now, or am I mad?
9