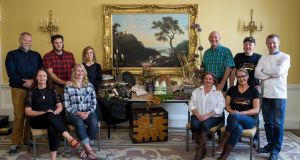 A fishmonger, a beef farmer, a dairy farmer, a goat farmer and garlic growers are the recipients of the 2017 Euro-Toques Food Awards, the only industry honours bestowed by Irish chefs.

The awards, introduced by Myrtle Allen in 1996, are made annually to five Irish producers of “food of notable flavour and quality”.

At Monday afternoon’s awards ceremony the late Veronica Steele of Milleens Cheese was also honoured with a special commendation for her contribution to the Irish farmhouse cheese industry. The award was accepted by her son, Quinlan Steele.

Fishmonger Stefan Griesbach, a regular at the Galway farmers’ market as well as supplying many restaurant kitchens, was singled out for the quality of the wild Irish fish he sources for his Gannet Fishmongers.

Eavaun Carmody received an award for her Dundrum Dexter Irish beef, reared in Co Tipperary. Her winner’s citation referenced the fact that her farm model is zero waste, with everything from the hides to the bones being processed.

Their promotion of kid goat meat, providing an alternative to slaughtering male kids at birth, earned an award for Becky and Charlie Cole of Broughgammon Farm in Co Antrim, where sustainability is at the forefront of all activity.

A final award was made to Marita and Peter Collier for their Drummond House Garlic, grown from 800-year-old heritage seed at their farm in Co Louth.

To be considered for a Euro-Toques Food Award, products must be nominated by members. A shortlist is then sourced and tasted by a Food Council committee. Farm visits, and information gathering on production methods, environmental impact and other considerations, are also part of the judging process.

The awards, sponsored by EirGrid, were presented at Hugo’s restaurant in Dublin, where head chef Margaret Roche used the winning products in a range of canapes.

Nigel Slater: ‘I’m happy, but I’ve only just realised it’
9