Cooking the book: Michael Pollan’s book makes it to Netflix

The message remains strong: cooking food, and thinking about its origins, can be a revelation 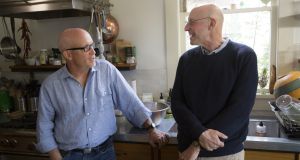 Filmmaker Alex Gibney and writer Michael Pollan worked on the Netflix documentary series, and Pollan says: “One of the great things about writing books or making documentaries is that you get paid to learn.”

Michael Pollan is finished finger-wagging. The writer and journalist wants to lure rather than lecture us back into our kitchens. And the man who coined the world’s pithiest dietary advice – “Eat food, not too much, mostly plants” – has just gone global with the transformation of his 2013 book Cooked into a new Netflix documentary with Oscar-winning filmmaker Alex Gibney.

I loved Cooked, the book. The television version is bigger in scope but just as compelling. After watching the bread episode with my nine-year-old son we stirred flour and water together. We now have a jar of softly burping gloop, which may or may not become a successful sourdough starter.

Pollan and Gibney are in a hotel room in Berlin where they’re doing interviews before the premiere later that day. It’s been a friendly collaboration between the two 60-something men, both fans of each other’s work. Although Pollan is expecting some flack for persuading a vegetarian to eat pork.

But first up, the demise of a fridge pet. “We’re living away from my home in Berkeley at the moment and we’ve a tenant in our house. And she was cleaning the fridge and she threw out my four-year-old sourdough culture,” Pollan says. What, no sourdough hotel for what has to be one of the world’s most famous jars of gloop?

“I should have put a label on it,” he says, not looking too heartbroken. “It probably did look kind of scary.”

What did Gibney see in a book about barbecues and braises? The director won an Oscar in 2007 for Taxi to the Dark Side, about an innocent Afghan taxi driver tortured and killed by American soldiers.

“There was a political and critical element in the book but there was also a very affirmative message that was also very personal,” Gibney says. “That seemed to me a muscle that I hadn’t properly exercised.”

So food was meaty without being too bleak?

“Exactly. All is not lost. There’s something you can do,” Gibney says.

“And usually all is lost in your films,” Pollan says.

Did Gibney eat well during the making of Cooked? “Not particularly when you’re in the middle of the outback in Australia. Your options are lizard and kangaroo tail. The lizard was not my favourite. It’s kind of like a combo of snapper and chicken.”

“You missed one of the best meals. The pig in my house,” Pollan says. A whole animal is smoked over a fire under a rigged-up tin foil and metal cage dome in his backyard. Then a vegetarian arrives.

“We were like ‘oh we have a vegetarian at a pig roast. How awkward’. But she was willing to try it,” Pollan says. And she loved it, delight unfolding on her face as she chewed. “But that will annoy some people, I have no doubt. We will hear about that.”

Is Pollan hopeful Cooked will also provoke positive reaction? “My fondest hope would be that the movie will inspire a certain number of people to think a little more about where their food comes from and get back in the kitchen another night a week.”

Pollan spends much of his time on film in his Berkeley kitchen but Gibney takes us into other cooks’ homes around the world, many of them a good deal poorer and more basic.

“One of the great things about writing books or making documentaries is that you get paid to learn,” Gibney says. “The production team was frustrated with me. They were coming up with ideas of various parks or things like that where there were artificial celebrations of the origins of cooking. And I was completely uninterested in that because it seemed like going to a zoo. I wanted to find a story in the here and now that was real about the origins of fire cooking.”

So they filmed the aboriginal Martu people who return to the Australian Western Desert to cook lizards and bush turkeys in smouldering fires, a strong link between their past and present.

“There was a great moment,” Gibney says, “when we asked one of the elders sitting around the fire, ‘what do you think the weather is going to be like over the next few days?’ And he looked out into the distance and he said, ‘there will not be rain for another five days and then it will come’ and I thought ‘we’re in touch with the mystical essence of people who’ve lived on the land.’ And I said, ‘how do you know that?’ And he said, ‘Well I just saw it on TV last night. It was on the weather channel.’”

Pollan is optimistic that cooking will survive despite the “cultural forgetting” of recent decades. “There’s still fresh food in the stores and we still have this appliance [called a cooker] in our houses. We haven’t given it up yet. And isn’t it great that we can still do this in our lives? Like the Martu we don’t have to do it everyday.

“I love to bake bread but I buy a lot of bread too. I don’t do it everyday. In a way it is a ritual thing for me. I reconnect to this competence of how to make bread. And it’s very very satisfying.”

More information about food is good, Pollan says, but “it gets ridiculous in certain hands”, a reference to the clean eating brigade.

“On the other hand you also get people who really resent the conversations. They gravitate towards KFC when they come up with a product that’s two fried breasts of chicken with bacon and mayonnaise and other meats in the centre, just absurd foods that have a full day’s calories in one sandwich. And these tend to be young men, men of a certain age. It’s just so flagrant and it’s just a big ‘f*ck you’ to the nanny culture.

“The heart of the problem is that these labour-intensive indulgent foods have become so cheap and ubiquitous. People didn’t have dessert everyday because it was a pain to make it.

“Most serious in terms of contributing to our own ill health is that the time cost of foods like French fries has gone down so dramatically because of the genius of industry. These are wonderful foods that we should enjoy. But they’re special occasion foods.”

One of the episodes tells the tale of Pollan’s childhood pet pig, called Kosher. After a summer away Kosher has grown too large for a Manhattan apartment and Pollan asks the singer James Taylor, who has a pig called Mona, to take Kosher over the winter. The much larger, older Mona takes severe offence. It doesn’t end well.

Off camera Gibney asks Pollan if Kosher ended up cooked? “That was just one of those questions that just popped up in my evil mind. That’s a hangup from all the other films I’ve done. A taxi to the darkside of cooking,” he says. Both men laugh.

Pollan didn’t eat his pet. She wouldn’t have tasted good.

What’s next? “I’m writing a book that’s a departure,” Pollan says. “It’s about psychedelic drugs, their role in our evolution. They’re revealing some very interesting things about the mind.” From Cooked to Fried perhaps.

Until then writer and filmmaker wait to see what a whole new audience makes of their kitchen collaboration.

Cooked is available now on Netflix

Want to avoid the wonky first pancake? Here’s how ...
4