Cooking chicken with a brick? Yes, you read that correctly 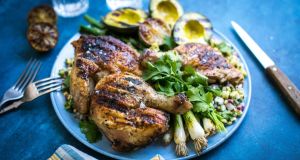 Summer does interesting things to a curious home cook. Longer days give more time to experiment. That pizza oven you’ve always dreamt of in the back garden seems more achievable in the lighter weather, while the biscuit-tin smoker you saw on Pinterest looks far too easy not to try. What could go wrong?

If any of that speaks to you then I assume you won’t raise an eyebrow when I suggest you add chicken cooked under a brick to your summer barbecue repertoire. The recipe that follows results in chicken with crisp skin but a juicy interior. Just be prepared for some strange looks when you arrive at the hardware store looking to buy just two bricks – and even stranger ones when you mention what they’re for.

For the more traditional cook I offer you a feast of summer lamb. Far too often lamb in the home kitchen is saved solely for special occasions, but more and more I find myself using it for everyday dinners like these spiced lamb chops – beyond the classic roast leg there are many culinary possibilities to explore.

This summer my cut of choice has been leg steaks. Fried with rosemary, garlic and balsamic vinegar they are a sweet sticky treat. Or slap them on a hot barbecue until charred and sizzling, then slice thinly and smother in an orange harissa sauce.

You can wrap the leftovers of either in flatbread, with hummus and a peppery rocket salad, for a leftover lunch to be proud of.

The barbecued-lamb recipe here is all about summer eating: serve a large platter of the spiced chops at the table with fresh tzatziki and a Greek-style salad.

Baking is often described as a science, which I always worry puts people off, but there are plenty of uncomplicated recipes to make even the most inexperienced bakers shine. The fig, honey and almond cake I share is one such example. I spent the summer of 2012 travelling around Italy to film a TV series cooking with Italian grandmothers. One of the nonnas we filmed with lived in the old city of Matera, in the southern Basilicata region, which has some of the most dramatic views I’ve seen. But it was the ease with which this sweet woman baked a beautiful cake that really blew me away: no weighing scales involved, just handfuls of flour, cups of sugar and an apronful of figs.

The result is an effortless cake that requires only the most basic baking prowess.

Light summer feasts are the order of the day. Should you bravely organise an outdoor event this season, I hope the following recipes will help feed you, indoors or out.

It’s not often I get to write about house bricks in a recipe, so I will enjoy it while I can. Crispy chicken skin, tender and juicy meat: it’s all there, but it does involve two bricks. The spicy salsa is also an ideal accompaniment for any grilled meats this summer.

Method
While your barbecue is heating up wrap two bricks completely in tin foil – yes, really.

Slice the chicken down the breastbone and coat the two halves of the chicken with oil, Cajun seasoning, sea salt and ground black pepper.

While the chicken is cooking add the spring onions, limes and avocados, grilling until charred on all sides.

For the corn salsa, put the cobs in a pot of boiling salted water and cook for 5 minutes. Drain, cool and, using a sharp knife, slice the kernels from the cobs. Mix the kernels with the remaining ingredients and season to taste. Set aside.

Serve the chicken on a platter with the avocado, spring onions, coriander, corn salsa and lime halves.

Should you be unable to track down ras-el-hanout spice blend – it’s in most ethnic food shops, specialist food stores and good supermarkets – a raid of your store-cupboard spices should suffice here: you can blend 2 tsp ground ginger, 2 tsp turmeric, 1 tsp cayenne pepper and 2 tsp paprika. There are essentially three elements to this recipe, the chops, the tzatziki and the salad, all of which can be enjoyed separately, or together as below.

Method
For the tzatziki, mix all the ingredients in a bowl, season to taste, cover and set aside.

Combine the lamb chops, oil and ras-el-hanout until the meat is completely coated. Put the chops on your hot barbecue grill, season and cook for 3-4 minutes either side, until medium rare.

Put all the ingredients for the salad in a bowl and toss together until well combined. Season the salad with a little salt and pepper.

Arrange the salad on a serving platter, place the lamb chops on top, drizzle with tzatziki and serve.

As much as I would love to give you this recipe in handfuls, cups and aprons, in the style of an Italian nonna, I have provided exact measurements just in case. This cake is a great way to showcase any summer fruits. Gently spiced, with a slight crunch from flaked almonds, the cake comes together with a drizzle of sweet and floral honey.

Grease and line a 20cm cake tin with a removable base with parchment paper.

Beat the butter and sugar in a large bowl until pale. Add the eggs, one at a time, mixing until they are incorporated. Fold through the flour, baking powder, salt, cardamom and cinnamon until you have a thick cake batter.

Finely chop 6 figs, leaving the rest cut in halves. Stir through the chopped figs and pour the batter into the cake tin. The batter is thick, so use a spatula to spread across the base of the tin.

Gently press the fig halves into the batter and sprinkle with the almonds. Bake in the oven for 40-45 minutes. Cover with foil if you find the almonds brown too much.

Remove from the oven and leave to cool. While the cake is still warm prick it all over with a cocktail stick and drizzle with honey, letting it seep into the holes.

Serve generous slices of the cake with a dollop of the vanilla mascarpone.

The Debenhams picketers: ‘We are like a little family’
7

Ross O’Carroll-Kelly: ‘They want us to vacate this place so they can use it as a love shack?’
Real news has value SUBSCRIBE