‘I kill 200 deer a year, and I can butcher one, start to finish, with this little knife’ 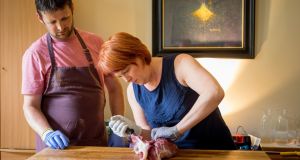 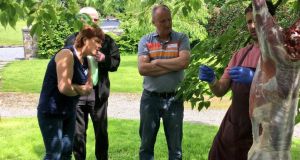 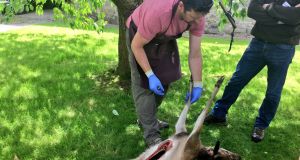 It’s the hottest, sunniest day of the year so far, and a diverse group of people – 10 men and three women – are gathered around the carcass of a young deer, which hangs suspended by its forelegs from a branch under a shady tree.

The group watching dispassionately as the animal is about to lose its fluffy coat, head and legs, are participants in a one-day introduction to butchery course at Croan Cottages, near Dunamaggin in Co Kilkenny, where Francis Nesbitt and his wife Niamh McCole run a variety of cookery, gardening and smallholding courses.

We’ve already watched master butcher Declan Gilmore skilfully break down a hogget (a sheep aged between one and two years), raised on the smallholding, and now we are witnessing the wild deer being skinned, in a series of artful and carefully choreographed moves made with a small hunting knife, in preparation for butchering.

There’s a gaping hole in the animal’s undercarriage, where its innards used to be, and from which a bright yellow tag now hangs. “Trained hunter identification label”, it reads, along with information stating when, where and by whom the animal, a year-old buck, was culled.

The trained hunter, who is at this moment snapping the deer’s front legs cleanly in two – for me, the only wince-inducing moment of the process we are observing – is butcher, angler and firearms instructor John Griffin. Griffin is a wildlife ranger in Co Wicklow, and has also worked in the meat industry.

He and fellow butcher Declan Gilmore are the tutors for this fascinating hands-on experience. The day begins, after coffee and delicious candied bacon and beer cookies made by Niamh, with a lesson on knife selection, sharpening and care. The tools both butchers favour are sturdy, relatively inexpensive knives by Victorinox, makers of the Swiss Army penknife. They’re utilitarian, not fancy models, like those that some chefs obsess about.

What they do seem to be fanatical about is sharpness, and their routine can involve the use of no fewer than three different grades of steel to get just the right finish on a knife. “It’s a lot easier to maintain an edge than to put it back,” Griffin says, and both caution that you won’t sharpen a blunt knife with a steel – for that you’ll need a stone or a sharpening tool, of which there are many varieties.

“I haven’t yet met a chef with a sharp knife, and I’ve lots of friends who are chefs,” Griffin tells us. “I kill 200 deer a year, and I can butcher a deer, start to finish, with this little knife,” he says, holding up a compact pocket knife, with a lethal blade.

“You can actually hear a knife when it’s sharp,” Gilmore adds, as he begins breaking down one side of the hogget (the class participants will get a chance to saw, cut and trim the other side later in the day). “Doctors bury their mistakes and butchers mince them,” he says as as he works, with the precision of a surgeon.

Watching closely and taking it all in are Elsie and John McCay, who have travelled from Tyrone to attend. Over lunch – roast lamb and delicious salads and an array of desserts, they tell me that they rear their own stock, and having had one go at butchering a lamb, they’re keen to learn more.

Our neighbours at the wooden table set in a beautiful garden surrounding the Nesbitts’ Croan House, where the class is being conducted are Giles, from Monaghan, who is an experienced deerstalker, and Tony, from Lucan, who has previously done a River Cottage weekend at Croan Cottages, and is booking in again when the Hugh Fearnley-Whittingstall team return in October.

Another husband and wife duo, Anthony and Susan, are currently living in Dublin, but have just bought a house on some land 20 minutes from Cork city, and are keen to get to grips with the realities of setting up a smallholding, as they intend to do.

Francis Nesbitt says that he had the idea of offering this course as a result of his own early days experience as a smallholder. “It was only when we first sent an animal to the butcher that we realised how little we knew about the butcher’s craft. We wanted to get the best from all of the work that goes into raising free-range, high welfare animals, but there are cuts we had never heard of.

“It took a lot of research and a few mistakes along the way to develop our knowledge. We’d like this course to provide a shortcut to that knowledge for others.”

Once the venison is butchered, it’s time to make sausages, with each participant chopping fresh herbs and adding spices to create their own personal banger. Tying a link of sausages isn’t as easy as it looks, we discover, but Gilmore and Griffin are on hand to untie the knots.

Each of the course participants leaves with a bag of sausages, venison burgers and Croan Cottage honey, with a folder of notes from the day’s butchering techniques and a selection of recipes, including those intriguing beer and bacon cookies.