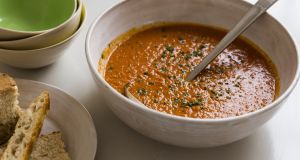 Many years ago I picked up a secondhand paperback cookbook from the 1980s called Howard and Maschler on Food by Elizabeth Jane Howard, the novelist, and Fay Maschler, the renowned restaurant critic for the London Evening Standard. This book never fails to make me laugh out loud, from the contents list to the reasons for certain dishes for particular occasions.

The chapter that offered the inspiration for this week is, of course, “Dîner à Deux”. In the introduction they give interesting advice for a successful romantic dinner: “The first time you are preparing a meal for a loved one or a prospective loved one, is often the first time that that person has spent a protracted length of time in the cook’s home. Making a meal takes some of the heat out of the scenario and also lends a backdrop of touching sights – men cooking can tug at the heartstrings effectively!” Keep in mind that this was written in the 1980s and while we appear to have evolved since then, it still works a treat.

“We are supposing that it is not an impromptu meal, a merry fry up of taking pot luck, but a planned event, someone has come into your life and the next canny move would seem to be to entertain them deliciously and let them glimpse a side of you of which they were perhaps not fully apprised. We are talking about concealed virtues like imagination, well-judged extravagance, simplicity, knowing how to deal with a scallop”. These days having people to dinner has become much more common and a more relaxed affair. We find ourselves drawn to dining in the kitchen which lends itself to less formality and ease for both cook and guest.

They go on to say: “There are most definitely foodstuffs that are sexy and foodstuffs that are banal. This perception does not have to be taken to the point of absurdity, as so often it is, so that seductive food has to be representational but while lobster does seem romantic, mince does not.”

They also make a good point about eating by candle light – flattering for everyone – and to ensure you eat food that is “neat, easy to eat with grace and style. Mince might well dribble down your chin”.

When I get to invite people around it’s the one time I don’t plan ahead and end up getting my guests to help me pull the last-minute things together. This is a real treat as it lends itself to instant relaxation and a sense of community as well as a chance to suss out your guests’ chopping skills!

Howard and Maschler finish with a word of warning: “Implicit in the event is a lack of familiarity with the other party, so be original but not too outrageous with the food, generous but not reckless so that if during the cheese course you realise you have made frightful mistake, it is not going to take you weeks to restore your bank balance, as well as your emotional one.”

Whether you are cooking or being cooked for this week, feeding and being fed is an act of love and nourishment so enter into it with abandonment and give thanks for the the gift of cooking, the sharing of cooking and food and may there be no lull in the conversation especially as you do the dishes together.

This week’s recipes are gentle on the bank balance and, as Valentine’s Day falls midweek, will not take much effort in the kitchen – no scallops involved! All recipes are obviously for two but can be doubled for four or halved, will also work if you are your own Valentine.

I have been making this soup for years and have always credited Elizabeth David with the recipe but as I try to find its source in her books, I have failed! The list of ingredients and especially the use of tinned tomatoes and especially roasted peppers led me to believe it was a post-war Mediterranean dish. Anyway, I picked this for Valentine’s night for its speed, spice and colour. It can always be made in advance and the flavour will benefit from it. If you fail to find tinned roasted peppers, roasting and skinning your own will improve the flavour but if time is not on your side you will still be very happy with the result without roasting.

1. Slowly warm a heavy-based saucepan and add enough olive oil to coat the bottom of the pan and warm the thyme, bay leaves and cloves until they are aromatic. Add the garlic and chilli and cook for another minute, without letting it brown; then stir in the onion and the peppers and season well with salt and pepper.

2. Stir well to coat the vegetables with the oil, cover the saucepan with a tight fitting lid and leave on a very low heat.

3. Check the pot after 10 mins and give it a stir. If the vegetables are sticking add a splash of water and continue cooking another 5 to 10 mins and longer if you are using fresh peppers.

4. Add the tomatoes and 1.5 litres of water. Bring to the boil; lower the heat to a slow simmer. Add the cabbage, cook on a medium heat for another 10 minutes.

5. Let the soup cool a little, remove the bay leaves and thyme stalks and whizz up until it is smooth but not too smooth as a little texture is good here.

A fast and spicy dish and the only item you might need to pick up in the shops could be the fish. The spice list is not set in stone so see what you have in your cupboard. If you are dining on your own, the spiced coconut paste will keep well covered in the fridge for a few days. Serve with rice.

1. Heat the oven to 200C. Toast the fennel, coriander and peppercorns in a dry pan until the aroma fills the kitchen. Grind to a powder and mix with the turmeric, chilli, cinnamon and salt.

2. If using a block of coconut, take half of the packet and dissolve in 225ml hot water. When cool, add the spices and the chopped onion and mix well. Check the fish for any bones and any loose scales.

3. Take an oven tray and lightly oil it and place the fish fillets skin side down on it. Spread the spice mixture as evenly as you can on the top.

4. Cut the lime into quarters and scatter on the tray and bake in the oven for anywhere between 5 to 10 minutes depending on the thickness of the fillets.

This dish is from the Savoie region in the French Alps. As with most recipes from this region you are guaranteed it’s going to be rich and hearty and nearly always have cheese and or cream in the dish. This dish reheats perfectly if needed!

1. Preheat the oven to 200C. Peel the pears, halve, remove the cores and quarter them

2. Take a shallow ovenproof dish that will take the pears snugly and arrange the pears in it, overlapping a little. Sprinkle on the sugar and pour over the cream add the vanilla seeds along with the pod and mix in well to the cream and the pears.

3. Bake for 20 minutes. Let it cool slightly and serve.