Barfly: The Sky & The Ground

This Wexford pub, named after a Pierce Turner song, is a true family endeavour 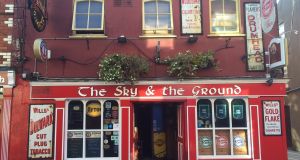 There’s romance and passion at the heart of The Sky & The Ground on Wexford’s Main Street. Landlord Johnnie Barron gave up working on the ferries to find himself standing with wife Nuala in the burnt out shell of a derelict pub he’d bought in 1995.

With Wexford musician Pierce Turner’s song The Sky and the Ground ringing in his head, he looked at the space before him and wondered how he might fill it. But fill it he did. It’s a hugely popular pub, with nooks and crannies and surprises at every turn. It grew with his family, and Johnnie’s eyes light up when he talks of daughter Enya’s success turning the upstairs space into a fantastic craft beer venue.

She was only a child when the adventure began, and laughs at the memory of dried blood on the outside back walls where an abbatoir once stood. There’s a great beer garden there now, with a circus tent heralding the slice of inspiration that the family brought to the place.

As The Sky & The Ground developed, the family’s passion for fun and drama grew, carving its name on the quieter end of a street packed with entertainment. This is a traditional bar with all that that demands, but deep inside is the passion that drives great pubs: family, community, friendship and local pride.

I’m only in the bar a short time and I’ve fallen hard for its quirky style and personality. I’ve met locals and tried great new beers. One of the barmen, Darragh, offers a taste of his first own brew – a chocolate smoked stout. He’s delighted with the result and it’s clear his future will grow from what’s in my glass and the training he’s had at the bar.

The Barrons have created a beautiful success story and they deserve to be proud – it’s a place you’ll want to return to.