Gastropub of the Year 2015 is beautiful inside and out 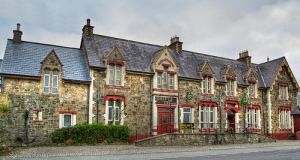 The Drift Inn in Buncrana: an upturned boat with huge, semicircular beams divides the main bar.

The Drift Inn in Buncrana is striking, inside and out. A cut-stone former railway station that serviced the Derry- Inishowen line, it continues to stop travellers in its tracks long after the trains were halted and it became a pub in 1953.

A delicious stroke of inspiration found the railway theme too obvious, so when you walk in you will find yourself inside an upturned boat with huge, semicircular beams dividing the main bar.

The counter bar is a clinker boat named after St Jude and don’t be fooled by the inviting seat by the fire – this is one of the hottest fires in Donegal and the fireside seat is regularly vacated by happy yet roasted guests.

They’ll usually stroll out back to the smoking area to cool down on the raised railway platform where it’s not hard to imagine the ghosts of generations of travellers waiting for trains as they look out across Lough Swilly to the many hills of Donegal.

The bar is owned by the Gill family today and run by manager Frank Murphy.

Craft beers have found a home here and Murphy enjoys pointing over his shoulder across the Swilly when people ask where Kinnegar beers come from.

It’s a music house too with trad sessions, country-and-western bands and, since it is never hard to get a song out of someone from Donegal, a Friday night karaoke session in the back bar.

This is a pub stuffed with fun and great contradiction in a truly fantastic part of Ireland. It also won Gastropub of the Year last year, so bring an appetite.

You won’t be disappointed.

How do you get bereaved fathers to talk? Bring a football
5

I’m Irish and I live abroad. Why have we been forgotten in Election 2020?
Real news has value SUBSCRIBE