Baking: Get your fix of French fancies with easy-to-make tuiles 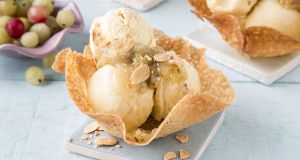 As with so many pastries, we have the French to thank for inventing tuiles, made from a mixture of butter, sugar and flour. Their brittle, lace-like shell is artfully shaped while hot, into curved wafers and casings such as baskets and cigars – depending on the skill of the baker, of course.

Brandy snaps are a close cousin, with the addition of golden syrup and ginger for a richer flavour.

Some tuile recipes are bound with egg white, giving a smoother texture. In this buttery recipe, flaked almonds give an added crunch.

For beginners, tuiles can be shaped using the curve of a rolling pin. If the thought of shaping them into baskets terrifies you, make straight wafers called langue de chat. Either way, they add a crispy element and a classy finish when served at a dinner party. Make them in advance, then fill them with whipped cream and berries or a spoonful of chocolate mousse.

My favourite way to serve tuiles is with boules of ice cream. Gooseberries are in season and a tart and tangy gooseberry compote can be spiced and teamed with both sweet and savoury dishes. An extra sweet compote folded through whipped cream makes the ultimate gooseberry fool.

This gooseberry ice cream recipe is easy to make and doesn’t require an electric ice cream churn. A few vigorous whisks while it is in the freezer and it will be ready in less than six hours. It is best to prepare the ice cream a day in advance of the tuiles or it can be made ahead and stored in the freezer for a week.

1 For the tuiles: Preheat oven to 180 degrees (fan.) You will need four ramekins (or glass jars) for shaping into baskets. Cut 4 x 12cm squares of parchment paper and place on a large baking sheet.

2 Cream together the butter and sugar until smooth and pale. Beat in flour well to a smooth paste. Spoon a quarter of the paste on to each square. Use a knife to spread the paste into four circles. Sprinkle flaked almonds over the top of each. Transfer to rest and chill in the refrigerator for 15 minutes before baking.

3Bake for six to eight minutes or until just turning golden brown. Once baked, cool for 20 seconds, then carefully lift each paper and drape the biscuit side over the base of each upturned ramekin. Peel paper off. Leave to harden and cool at room temperature. Store tuiles in an airtight container until ready to use.

4 For the ice cream: make the gooseberry compote by simmering the water and sugar in a saucepan for a few minutes until starting to turn syrupy, add gooseberries and simmer for 10 minutes, mashing with a wooden spoon as the gooseberries break down, set aside to cool.

5 Whisk the egg yolks and sugar together until the mixture is thick and leaves a ribbon-like trail.

6 In a saucepan, bring the cream and milk to a simmer with the scraped seeds from the vanilla pod, then whisk directly on to the eggs and sugar. Return to the cleaned saucepan, and stir over a gentle heat until the mixture starts to thicken and coats the back of a spoon. Transfer to a clean bowl and set aside in a cool place.

7 Once cool, stir in the gooseberry compote. Transfer to the freezer and stir the ice cream every hour for four hours until set frozen.

Variation Elderflower blossoms are abundant on hedgerows in June. Elderflower and gooseberries are a delicious match, so if you have some elderflower cordial, why not add a dash to the gooseberry compote.