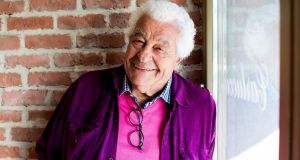 Antonio Carluccio at the opening of Carluccio’s restaurant and food shop in Glasthule, Co Dublin in 2015. Photograph: Andres Poveda

Antonio Carluccio, who has died aged 80, was a standard-bearer for Italian cooking. His voice, his accent and his appearance seemed tailor-made for the role of lovable and ebullient son of the soil with a generous passion for good food.

His many television programmes and nearly 20 books explored facets of his homeland’s culinary life, touching on literature, history and wild foods (particularly mushrooms), as well as offering reliable instruction in the classic and regional dishes of Italy.

At the same time, his Neal Street Restaurant in Covent Garden, London, and a growing number of restaurants and delicatessens around the world trading under the name of Carluccio’s made his brand unmissable.

Antonio’s father, Giovanni Carluccio, was a stationmaster on the Italian state railway who came from a family of bookbinders in Benevento, north-east of Naples, but who had elected to take up a railway career as a result of connections of his wife, Maria (nee Trivellone).

A series of small halts and junctions was punctuated by the births of six children, each claiming a different town of origin. Antonio, the fifth child, was born in Vietri sul Mare on the outskirts of Salerno, on the Amalfi coast. He was still an infant when the family moved north, to Piedmont. It was in the Val d’Aosta, which stretches into the Alps north-west of Turin, that he imbibed something of the lore of foraging.

Carluccio did not discover his true metier for many years, indeed not until he arrived in Britain in 1975. Before that he had accumulated a miscellaneous portfolio of occupations in Italy, Austria, Germany and Spain. Soon after leaving school he spent a year at a naval academy in Sardinia, but returned home to brief stints as a hair-oil salesman, then cub newspaper reporter in Turin, with the Gazzetta del Popolo and La Stampa, before finding settled employment with the typewriter manufacturers Olivetti, a significant player in the north Italian postwar industrial boom, only five minutes down the road.

And there he might have stayed, had his younger brother, Enrico, not drowned while swimming in a lake near the family home in 1960. This affected Carluccio deeply and was possibly the trigger for the depressive episodes that were to dog him for the rest of his days.

More immediately, it provoked him to fly to Vienna to join an Austrian girl whom he had met and fallen in love with while holidaying in Liguria. There followed more work for Olivetti in Austria, as a salesman selling early photocopiers, then Italian wines, and financial products in Berlin and Hamburg, as well as representing German travel firms and property developers in Italy and Majorca. Moves from one city to another were often prompted by emotional attachments. He first married in Hamburg in 1968, divorcing in 1975.

It was at this juncture, selling property in Ibiza, that he pursued a girlfriend to London and set about learning English and obtaining gainful employment. He succeeded with the language, though he never lost his strong Italian intonation, and found a berth as a wine salesman, which allowed him free entry to the world of Italian restaurants and kitchens throughout the capital.

Although he was not yet professionally involved in catering, he acquired much skill as an amateur cook, and has eloquently described how he might retreat to the kitchen in response to his various emotional highs and lows.

These continued – through a short-lived second marriage in 1978 – until he met Priscilla Patrick, the younger sister of Terence Conran and creative director of the Conran Design Group, in 1980. They married the following year.

It was the Conrans who encouraged Carluccio to enter the Sunday Times Cook of the Year competition in 1981 in which he was a finalist and which brought his enthusiasm for Italian food and for the greater acceptance of wild mushrooms to a wider audience than his friends in the Italian restaurant trade.

It made the suggestion of Terence Conran that Carluccio should take over the management of the Neal Street Restaurant, which he had founded in the 1970s, less of a shot in the dark, and one which Carluccio embraced with open arms in the same year. Neal Street was a wonderful eating house, but at this juncture it needed fresh hands on the reins.

Carluccio made it his (and indeed bought it in 1989, and ran it until its closure in 2007), and gradually the menu reflected more and more of Carluccio’s country of birth (as well as his mushrooms). The vast basket of fungi that greeted new arrivals in the autumn was always impressive.

The restaurant was the springboard to a double career on television and in books. Carluccio’s persona seemed ideally suited to TV and he was a regular on the BBC’s Food and Drink Programme and other magazine shows as well as undertaking longer series – including Antonio Carluccio’s Italian Feast (1996) and Southern Italian Feast (1998), and two series of Two Greedy Italians (with his former colleague Gennaro Contaldo) in 2011 and 2012. His most recent TV series, Antonio Carluccio’s Six Seasons, in which he travelled around Australia, was broadcast there in 2016.

His books ranged from An Invitation to Italian Cooking in 1986, through several titles on mushrooms (the first being A Passion for Mushrooms in 1988), to books to accompany his television series and one-off programmes on the Renaissance chef Bartolomeo Scappi (Carluccio and the Renaissance Cookbook, 2007) and the novelist Giuseppe Tomasi di Lampedusa (Carluccio and the Leopard, 2008).

In 2008, it was reported that he had cut himself in an accident while sharpening a kitchen knife

When his wife left the Conran Design Group in 1990 they expanded into the shop next door to the restaurant and opened a delicatessen, Antonio sourcing the produce and Priscilla overseeing the branding and design.

From this it was a short step to wholesaling the produce and then, in partnership with Simon Kossoff, to establishing a small chain of cafes and food stores, Carluccio’s Caffès, from 1999.

There were two outlets in Dublin, one in Dawson Street and another in the southside suburb of Glasthule.

Their success was great, to such an extent that they moved beyond any personal control when the Carluccios sold their own stakes in 2005. Eventually Antonio rejoined the enlarged company as a consultant.

Carluccio was made a Commendatore of the Italian Order of Merit in 1998 and appointed OBE in 2007. In 2008, it was reported that he had cut himself in an accident while sharpening a kitchen knife, and shortly afterwards he was treated for depression at the Priory clinic.

He was able to resume his role as ambassador at large for the Italian way of cooking, and published a volume of memoirs, A Recipe for Life (2012), and a compilation of more than 300 recipes from across his culinary career, Antonio Carluccio: The Collection (2012).

His marriage to Priscilla ended in divorce in 2009.