Five Go on a Treasure Hunt: Pat McCabe, please bag me a fortune

When asked for this series, in competition with four other bargain hunters, to pick up an old item that could turn a profit, I set out to find a decent rare volume 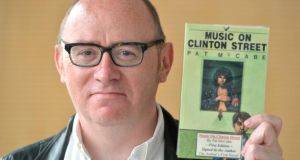 We gave five treasure hunters €100 each and sent them off to bag bargains. At the end of the series, James O’Halloran of Adam’s Auctioneers will value the items and the winner will get €500 for the charity of his or her choice. Donald Clarke’s chosen charity is the Irish Cancer Society.

I’ve purchased stuff from second-hand stores – everything apart from underwear – but that’s because, raised as an Ulster Protestant, I’m pathologically inclined towards meanness.

Mind you, I did once work in an antiquarian bookshop. Twenty-eight years ago, shortly after leaving university, I spent a few months toiling in the most vulgar corner of a distinguished establishment just off Piccadilly. As a temporary employee in the tiny “new books” section, I was viewed with all the respect due to a rag-and-bone man or a heroin dealer. But from that vantage, I got to soak up quite a bit of musty atmosphere and absorb some details of the business.

Long men (no women) in houndstooth suits and pebble glasses blew the dust off first editions while making remarks about “foxing” and “deckle edges”. I learned that everybody was on the hunt for a “fine” first of Watership Down. Laughter ensued when I wondered if my wages would cover an early Flann O’Brien. If, I pondered, Anthony Powell or Muriel Spark could just write me into this world, then I might go on to live a very agreeable life. Sadly, at the Christmas party, I got noisily drunk with Ed from “packaging” and felt it politic to leave under the nearest cloud.

Anyway, the point is that, when asked to pick up an old item that I think will prove profitable, I decide to forgo Edwardian rocking horses and seek out a decent rare volume that might retain its value.

The capital no longer teems with specialists in first editions and antiquarian books. The stupid internet has done almost as much damage to that trade as it has to poor wee newspapers. But such establishments do still exist.

A first attempt brings me tantalisingly close to the ideal item, before it is snatched cruelly from my grasp. I have vague memories of strolling amiably through the First Editions antiquarian bookshop on Pembroke Lane, Dublin 4, and, uncharacteristically, I managed to cycle straight there without getting more than a little lost.

What the heck is this in the front window? It’s a version of Mary Shelley’s Frankenstein featuring an image of Boris Karloff as the Creature on the dust jacket. I bow to nobody in my devotion to James Whale’s 1931 version of the story.

The only difficulty with such a purchase would be the eventual need to prise it from my white knuckles. I glance to my left to discover that, rather quaintly, the shop is closed for summer holidays and will not reopen until 10 days after our deadline. Further fury is stoked when, after consulting the dread internet, I discover that the edition – published by Grosset & Dunlap at the time of the film’s release – might just creep under our price ceiling of €100.

To Ulysses Rare Books on Duke Street, a family business, now taking in a third generation of the Cunningham clan. The shop moved to its present location in 1988. The establishment was originally called Cathach Books, but, on Bloomsday last year, aware that this wasn’t the easiest name to get a tongue around, the proprietors swallowed hard and embraced the Joycean connection.

Later editions of that book line the shelves. Eye-wateringly expensive early editions sit behind glass over the counter.

David Cunningham (henceforth David snr), his sister Aisling, and their nephew David (who I am calling David jnr) staff the soothingly underlit shop.

Nobody shows me the accounts, but I am happy to relate that, during my two trips, I see different US visitors buy a rare print, an early edition of Brendan Behan’s Borstal Boy and something else whose name I can’t make out in my notes. Business seems brisk.

The stupid internet has left a few survivors. “Well, if you’re buying a modern book, you can be sure the copy you are getting online is as good as one you’ll get in a shop,” says David snr. “You will have no worries about whether the conditions are described properly. New books are like baked beans in that way.”

That makes sense. However, nobody wants to spend €250 on an early edition of Flann O’Brien’s An Béal Bocht only to come across chewing gum on the flyleaf.

Of course, this is also where people discover that volumes they thought worthless are, in fact, valuable enough to admit dreams of speedboats and Alpine cabins. You don’t want to trust those transactions to the internet.

“You don’t get that too much any more,” David snr laughs. “People tend to look things up online before they come in. But I remember one woman who came in with a book that turned out to be a first edition of On the Origin of Species by Charles Darwin. She knew it was valuable, but not how valuable. You are looking at €50,000- €60,000 for that.”

We won’t quite stretch to that. But you can find some delicious stuff for less than €100. David jnr produces a first edition of Seán O’Casey’s Story of the Irish Citizen Army – attributed to “P O Cathasaigh” – which just sneaks into the bracket.

A gorgeous picture-book variation on Alice in Wonderland, produced to celebrate the 200th anniversary of Guinness, comes in at a tolerable €95. (Yes, there was a time when booze manufacturers were allowed to publish children’s books.)

Particularly fascinating is a hilariously patronising study of American mores, written as a guide to British citizens during the second World War by no less a figure than Louis MacNeice. Meet the US Army, from His Majesty’s Stationery Office, is packed full of sage advice. “Far from being ‘bad form’ it is the expected thing that the crowd should declare its feelings,” the Carrickfergus man notes when discussing American sport.

It’s a lovely item, but David jnr reckons that, at €65, it might have reached its peak.

Hang it all. I know what I want. There are a number of attractions to this signed first edition of Pat McCabe’s Music on Clinton Street. As the great man’s first novel for adults, released in a relatively small print run, it has a good chance of making us a small profit. There’s history here: the book was published by Raven Arts Press, creation of Dermot Bolger, and was designed by that equally fine writer. It’s an underrated novel that engages with many obsessions found in McCabe’s later work: small-town madness; the joys of pop music; troubled adolescence.

There’s something else. The book was published in 1986, when, unaware who McCabe was soon to become, I was working in the dreaded “new” section of a prominent London booksellers.

Did it sit on the shelves? Almost certainly not. But I could have ordered it and saved myself some of the €95 it would end up costing in 2014.

Would we even be reading books then? Surely we’d be ingesting literature in pill form. Maybe the Venusians would have taken over. Hang on a moment. What’s a “euro” when it’s at home?

Next week: Rosita Boland on her clockwork forage