Wrap dresses: I thought I was over them 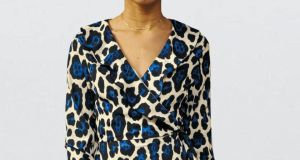 The wrap dress by John Zack.

“Well, if you’re trying to slip out without waking a sleeping man, zips are a nightmare.” The words of the scary-but-fabaliss Diane Von Furstenberg, when she was asked why she’d “invented” the wrap dress for which she’s now famous.

She’d wanted to create a dress that gave women freedom, a dress that would take us from “the beach to the boardroom to the bedroom”. She sold her first design in 1974 and it quickly became identified with the second wave of feminism.

Made of high-quality cotton or silk jersey, it was size-adjustable (no buttons or zips) so tended to be often flattering, and always well fitting.

The wrap dress faded into the background during the 1980s and 1990s but made a triumphant comeback during the Celtic Tiger. Indeed, one of my strongest memories of 2003 was standing in some grandiose hallway, under a chandelier which had cost €70,000 (according to my boasty, chemically enlivened host), surrounded by women, literally ever man jack of them kitted out in stretchy fabric knee boots and some version of a wrap dress.

At the time I went on a lot of book tours and I was obsessed with wrap dresses, particularly those by Issa. The “wearability”! They were an entire outfit in themselves, they “travelled” well (ie didn’t wrinkle,) they were comfortable and flattering and worked as well for a telly interview as for lying on a hotel bedroom floor, weeping and eating Pringles from the minibar (an all too-regular event back then).

But then it all went to hell. I got WDO (wrap dress overload). It felt like there were no other clothes, not anywhere. I began to crave structure in a garment. I wanted to have to wear different things for different times of the day, I missed saying, “I’ll just go and get changed.”

But doesn’t it just go to show that even when you give human beings perfection, they’ll eventually get bored of it? We’re a disgrace of a species.

For a long time afterwards, whenever I thought of a wrap dress, I’d get Celtic Tiger PTSD; I’d look around fearfully, wondering who was going to tell me about an investment property they’d just bought.

And now wrap dresses are back. Initially I was resistant, but now I’m cautiously resuming our friendship. They’re not exactly the same as they were – indeed, neither am I. The difference is mostly in the fabric: instead of stretchy cotton jersey, they’re unlikely to have any “give”. But a bit of structure is no harm.

I’ve picked this one by John Zack because it’s flattering, not very spendy and the print is totally on trend.