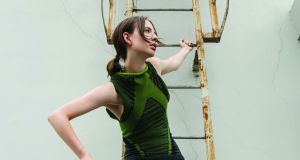 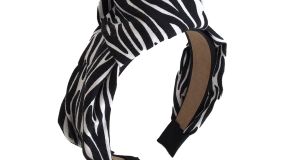 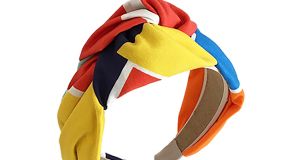 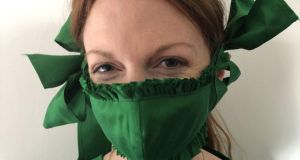 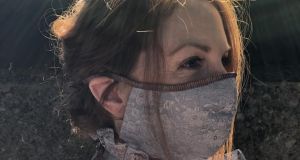 Grey silk and lace face covering by Natalie B Coleman.

Two talented Irish Royal College of Art (RCA) London fashion graduates, Andrew Bell from Dundalk and Rebecca Marsden from Sligo, have been selected as finalists from more than 600 worldwide for the ITS fashion awards due to be held in Trieste in late October. The highly sought-after awards have been running for 19 years and the theme this time, Here We Belong, focuses on sustainable and innovative fashion.

“It’s a ray of hope and sunshine and an amazing opportunity,” says Bell, known for his futuristic and subversive approach to traditional tailoring using sonic welding and taping technologies. A recipient of a Kildare Village/RCA sponsorship, last year he presented his collection at Dublin Port during Open House Dublin, showing his collection of foldable outwear pieces with their own lightweight elegance whose patterns were made using Hoover bag technology and whose footwear heels were made with door wedges. “Getting into the final is considered to be an award in itself,” he says.

Marsden, a graduate of Limerick School or Art and Design (LSAD), is in the forefront of knitwear technology innovation, and her aim is completely seamless garments. She has been working with Santoni R&D in Italy and Shanghai on how far their machinery can be pushed to produce what she designs and the relevant software. She has also been collaborating with aerial dancers on seamless garments that meld with the body’s movement and creating footwear on the same principles.

“It is very exciting,” says the designer who also lectures, currently online, in Sligo and LSAD. She and Bell will now be waiting to see whether the two to three-day event will be held in Trieste in October or produced digitally online.

Record-breaking audiences for Normal People indicate that the lockdown has also increased the focus on what the two leading protagonists, Connell and Marianne, are wearing. Connell’s simple chain necklace now has its own Instagram account enjoying a similar furore created by the Aran sweater worn by Chris Evans in Knives Out a few months ago. The show’s acclaimed costume designer, Derry-born Lorna Marie Mugan, likens it to what James Dean did to the white T-shirt in the 1950s. Elsewhere, Marianne’s tortoiseshell hoop earrings have sent others into a swoon confirming an already hot trend. These ones, for instance, by Uterque (a site always good for costume jewellery) are a mere bagatelle at €34.30, reduced from €49.

Power to the scarf

“Empowerment” is the theme of Susannagh Grogan’s latest scarf collection, a new take on the classic accessory that is non-seasonal and as a gesture to slow fashion, will remain part of a permanent collection. The print is a bandana/skin/geometric with an “empowering” word in large font in contrasting colours in the middle. The words come in either Irish or English and include ones like Love or Grá, Extraordinary or Láidir, Boundless or Duine ar Leith, Empowered or Éifeachtach, Brave or Curúil. The Irish version scarves come with a translation card in English and the English scarves with relevant inspirational quotes. Each 60cmx60cm silk scarf is €65 and comes gift-wrapped from www.susannaghgrogan.ie

Masks of every kind continue to be in the news and trust Irish creatives to come up with their own versions. Some of the most colourful, predictably, are those in limited edition from Helen Steele whereas some of the more glamorous are from fashion designer Natalie B Coleman who is making face coverings from silk, cotton and linen in her studio. It helps to keep her seamstresses in business as well as sharing profits with Women’s Aid in Dublin. The prices are €25-€40 and most, like Steele’s, are limited edition. There is even one in grey silk and lace.

New trims, prints and fabrics every week can be seen on her Instagram feed and bought from her website nataliebcoleman.com

Milliners, and Ireland has many, have found alternative ways to deal with the drop in demand due to cancellations of weddings, race meetings and other celebratory events from which they have traditionally profited. Emily-Jean O’Byrne is one in question who has produced a range of hairbands to lift the tresses as well as the spirits.

Now based in Moycullen, Co Galway, the former jeweller, well known in racing circuits for her eye-catching creations, has produced four different patterned hairbands – a floral print, a retro print, a zany zebra and one called candy crush. “Turbaned wear for your video calls” is how she describes them. From €45-€58 find them on emily-jean.com

When Ailbhe Garrihy got married in a dream wedding in Doolin, Co Clare in October, local knitter Ekotree’s Diarmuid Neilan made a series of soft white cable cashmere sweaters to wear with long sage skirts for her and her bridesmaids. Member of the Burren Eco Tourism network, Ekotree has a workshop and visitor centre in the village and carries out all stages of knitwear under one roof from design, sampling and manufacturing to milling and assembling so are not dependent on any suppliers other than the initial cashmere yarn. This gives it the resilience to weather the fall in visitor numbers due to the pandemic, but also allows it to continue to sell online – everything from shawls and snoods to arm warmers and beanies. Visit them on ekotreeknitwear.store

Another Irish fine jewellery maker who has just launched a new website is Stuart McGrath with a collection in white and yellow gold with mother of pearl, lapis lazuli, emerald and diamonds – very special pieces. McGrath, who initially trained as a sculptor but had to abandon a career restoring historical architecture and designing monuments after an accident, then turned his hand to fine contemporary jewellery winning many awards. Inspiration for his latest collection comes from his various travels and encounters such as the Black Widow collection which features rubies and black mother of pearl representing the distinctive marking of the spider. Visit his site: armoura.com