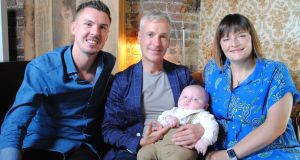 Mikey O’Brien, Conleth Teevan and Rhona Drummond with baby Felix at his naming ceremony in August 2018

In the run up to the marriage referendum, one of the key pieces of legislation that was on the table was the Children and Family Relationships Act 2015. This was viewed as an important piece of legislation, not just to formalise guardianship and parenting issues, but also so that the conversation during the referendum would be focussed on extending marriage rights to same-sex couples. But the referendum conversation in 2015 ended up being about a lot more, including modern Ireland and modern families.

The rhetoric from the dominant anti-marriage equality side or campaigns was often not about marriage at all, but about parenting. This rang alarm bells for LGBT+ people, who have for a long time been subjected to a scale of homophobia related to their parenting capabilities – from insinuations and dog-whistling, to fabricating links between gay men and paedophilia, an incredibly hurtful and false narrative.

One campaigning organisation that sprung up at that time was Mothers and Fathers Matter, which was initially formed to oppose the Children and Family Relationships Bill, before it went on to campaign against marriage equality. One narrative during the referendum campaign was that every child “should” have a mother and a father, and that it is within married, heterosexual families where children thrive.

Same-sex couples, single parent families, divorced parents, children raised by grandparents, and countless other blended family units resisted such a narrative. What became apparent was that the idea of a “norm” defies the complexity of real life.

In the aftermath of the marriage referendum, and in the ensuing years, there is a presumption that all of the aspects around equality for LGBT+ people and their families were taken care of, but five years later, Part 2 and Part 3 of the Children and Family Relationships Act were still waiting to be scheduled for commencement this May.

During that time, many families have encountered and struggled with complex legal frameworks, the courts system, and rights for parents in families who are not biologically linked to their children (although the Civil Registration Act of 2019 provided a framework for the registration of a same-sex female couple as parents of a child born through donor conception). This means that some same-sex female couples can be registered on their child’s birth certs. However, many families are still not covered by commencements in the Act, including two male parents, people who have had home inseminations or used a known donor or reciprocal IVF, as well as those who have used surrogacy or sought treatment abroad.

The shortcomings aren’t just in legislation, or across the details of who is named on a birth certificate, or who is a guardian, but also in the granular aspect of documents, forms, and policy. Ciarán Moynagh of Phoenix Law in Belfast said:

“The referendum allowed LGBT families to become visible, and that created a level of education and acceptance. But working down into the practicalities of this, a lot of schools have forms saying ‘father’ and ‘mother’, and there are plenty of low-level changes that exist where whilst we may acknowledge that these families are ‘there’, we haven’t brought them completely into policy yet.”

Etain Kidney and Michelle Walls joke about “getting married three times”, firstly a civil partnership in Dublin, then a wedding in Spain, and finally, registering their official marriage. Since then, they have had two children. “Honestly, I find it really confusing,” Kidney says. “I know that things got better after civil partnership, but the big thing for me is always going to be parental rights and guardianship. Right now, both [her and Walls’s sons] Tadhg and Bobby are strangers in law to Michelle. We could have gone to the courts and made Michelle a guardian for Tadhg after two years, but up to now we would have to petition the courts for Michelle to be considered a guardian.”

Organising family life is tricky enough without carving out time to tackle the legal aspect of things. “We didn’t do that because I knew legislation was coming down the road, and I actually expected it to land a lot sooner. [Alan] Shatter was championing it. But then it was off the table, and now it’s coming through. With Bobby, I thought she would be on his birth cert [as a parent]. They say ‘it’ll change in May’, but I don’t know.”

Conleth Teevan, his husband Mikey O’Brien, and their son’s biological mother Rhona Drummond, encapsulate the idea of a modern family, all cohabiting, all parenting their son, Felix, and they have another child on the way. “Your life is always going to be busy with a child, but there are three of us, so it does take the pressure off a little,” Teevan says.

“There was a lot of planning. In the beginning it was a conversation between the three of us. I put my head in the sand for two years . . . Mikey said he always wanted to have kids, to the point that he said he was even considering not coming out and going that path. It’s an honour for me to be a part of our family. With Felix, I don’t feel that he’s not biologically connected.”

“I have the utmost love for Felix,” Teeven says. “[It’s] an intensity I didn’t think I would feel. It’s strangely magnificent, and how he reciprocates that love.” With surrogacy still something of a legal minefield, not to mention hugely expensive, Teevan says that a contract drawn up between people tends not to have much legal standing. “Whether a relationship is straight or gay, it all comes down to trust. A family lawyer said ‘have everything written down’, but we trusted that things would work out. We do that in partners, we see something in them that we trust or believe.”