Saoirse Ronan was among the Hollywood A-listers to shine on the red carpet as the stars of the film industry gathered in Los Angeles for the 2020 Oscars. Video: Reuters 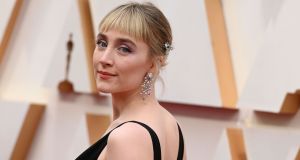 The grand finale of award season arrived on Sunday night with the 92nd Academy Awards. For the last stop on the dazzling awards merry-go-round, glitter, capes and big, rich diamonds were served up on the Oscars red carpet, which is the most ogled and critiqued of them all.

But the rainy Los Angeles weather seemed to quench the fiery fashion risks and experimentalism, as many actors played it safe, toeing the style line, adhering to tried-and-tested formulas. If there were themes for the frocks, it was black, white, gold, with the odd searing shots of statement shades, all topped off with blingy, collar necklaces.

Dressing with winner-takes-all-drama was Saoirse Ronan who revelled in an unapologetic, dramatic silhouetted Gucci gown, which featured a plunging neckline, peplum frill and contrasting black and pastel colour combination. Slicing through the froth and fantasy, Ronan also nodded to sustainability with the black bodice on the Gucci dress crafted from the same reel of material as her Baftas gown.

Also getting in on the avant-garde act was Irish actor Caitriona Balfe, who dressed in a bow-adorned sheer pink overlay that sat atop a black fishtail dress by Valentino. She finished off the look with a scarlet lip and sleek hair.

In a first for Ireland – and female  conductors – Galway-born Eimear Noone made history as the first woman to conduct at the Oscars. Noone lead a 42-strong orchestra that performed excerpts from the five nominated scores, before Joker scooped the coveted award. For the occasion, Noone opted went for an avant-garde look from Dublin-based designer Claire Garvey, who crafted an embellished gold blazer with dramatic train for the groundbreaking performance

Sequins – always a Oscars stalwart – worked well this year, with Rebel Wilson in Jason Wu, Sandra Oh in Elie Saab, and Brie Larson in Celine, shimmering in Dancing With the Stars-worthy embellishment.

Beanie Feldstein in monochrome sequinned Miu Miu, Renée Zellweger in a white glittering one-shoulder Armani Privé and Janelle Monáe in hood-topped silver Ralph Lauren all demonstrated that all that glitters is not always gold.

Black dresses had a serious moment and the dark-as-night tone was set straightaway by Joker star Zazie Beetz within seconds of the red carpet opening as she shimmered in a Thom Browne bandeau top and midi skirt. Also bringing architectural and interesting black silhouettes were Charlize Theron in custom Dior, Penélope Cruz in Chanel, Rooney Mara in Alexander McQueen and Geena Davies in Romona Keveza.

Kicking it up a notch and combining black with a dose of power pastels was Oscar winner Laura Dern in Armani Prive.

Booksmart actor Kaitlyn Dever showed her style smarts by plumping for a sustainable red column gown covered in Swarovski crystals and a glass beads dress crafted by Louis Vuitton. As an ambassador for the Red Carpet Green Dress initiative, Dever explained how everyone can do their part to be more planet-friendly in fashion: “It’s just about getting used to it, so with fashion I think you can maybe think a little bit before you buy something brand new, and I think you can also support vintage.”

Doing just that, Margot Robbie remained unwaveringly loyal to Chanel, but instead of opting for a fresh-from-the-catwalk couture creation, she chose a vintage number. Olivia Coleman also chose sustainable design by Stella McCartney.

Sending a more explicit message was Natalie Portman. The actor donned a black and gold Dior cape embroidered with the names of female directors who didn’t receive nominations. Speaking on the carpet, Portman said: “I wanted to recognise the women who weren’t recognised for their incredible work this year in my subtle way.”

Then there was Florence Pugh, who has emerged as the most idiosyncratic dresser of awards season. Pugh’s red-carpet apprentice status gives fresh perspective, freeing her not to follow the rules. For Oscars 2020 she dressed in a teal green frilled floor-length gown with co-ordinating shoes by Louis Vuitton.

Should women erase men from their lives? This writer thinks so
6