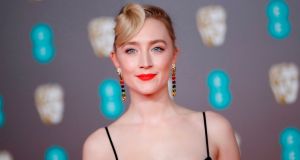 On a freezing February evening, Hollywood stars descended on London’s Royal Albert Hall on Sunday for the 73rd British Academy Film Awards. When it came to the red carpet fashion, Baftas attendees were tasked with an extra red carpet challenge: dress with a sustainable twist.

The academy had decreed that all guests must make more educated wardrobe choices and opt for a style with green accreditation. This could be vintage, secondhand, renting or re-wearing. It even went as far as supplying a sustainable fashion guide, created by the London College of Fashion, for those confused by the stricter dress code.

With photos beamed across the world from large-scale awards ceremonies such as the Baftas, celebrities have a raised platform to make more environmentally friendly choices, in turn influencing others, making sustainable dressing the norm.

Irish star Saoirse Ronan, who was nominated for best actress, didn’t let the sustainable red carpet deter her sartorial choices, proving you can be glamourous and green. Ronan, who has appeared on all of awards season’s most anticipated red carpets in a chameleon-like range of styles from slinky to whimsical, went back to basics with a black voluminous Gucci gown. The simplistic satin gown with leather straps was a blank canvas for Ronan’s hair and make-up – a twisted-front updo and classic red lip. Glittering coloured gem earrings added a statement flair.

Ronan’s stylist, Elizabeth Saltzman, told British Vogue the gown was made from discarded satin. “We wanted to create a gown that didn’t waste any resources or people’s time . . . It’s the first time we’ve gone dead simple,” she said.

Another Irish acting nominee, Wild Rose star Jessie Buckley, who was also on the best actress shortlist, opted for a luxurious gown by Italian fashion house Miu Miu which was decked out in velvet and feathers.

Kate Middleton, had no qualms, either, in adopting the updated dress code. With a consistently practical and appropriate approach to style, the Duchess of Cambridge is prolific at re-wearing and recycling her wardrobe, something that is not as apparent with the Hollywood elite.

Midleton showed the A-listers how it’s done, dipping into her royal archive, re-wearing an gold and cream tulle gown by Alexander McQueen, that she first wore for the royal tour of southeast Asia and the south Pacific in 2012.

While sombre tones dominated with Clarke, Ronan and Robbie all wearing darker-than-night hues, shades of pink electrified the red carpet.

Florence Pugh competed with Charlize Theron in the effulgent stakes, with both actrors battling out in impactful brights. Pugh combined a Dries van Noten Spring 2020 parachute cape over an abbreviated black dress, while Theron wore her boldest Dior dress yet – a striking purple pleated handmade gown.

Mass housing developments should have a conscience
7