With his latest project, Conor Clinch is making disability more visible in the fashion world 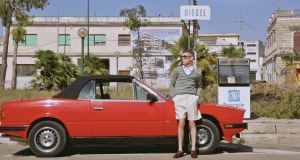 “London’s hottest photographer is an Irish teenager,” went the headlines when 18-year-old Conor Clinch from Coolock in Dublin was hailed by Rankin, one of the world’s most celebrated photographers, as an outstanding talent. “Rarely does a very talented young photographer stop me in my tracks . . . he is totally passionate about his art,” said Rankin. Clinch’s winning project was an exhibition based on lad culture in Dublin, and his prize was a two-week stint working as Rankin’s protege in London.

All that was six years ago. Since then his professional career has blossomed in London, and has seen him working on campaigns for Topshop, Hunger, Vogue, River Island, Gap and Kent & Curwen amongst others, and more recently Nike and Asos.

“I get very big projects and work with brands to produce and develop films that tell a story. I want to focus on storytelling and getting people’s voices out there and partnering with big brands who have a platform, credibility and want to have a positive effect at a time when there is so much negativity,” says Clinch.

Known for the authenticity and rawness of his work, his portraiture and choice of models, he has always challenged himself creatively but remains true to his style and fresh approach. He has also increasingly moved into film, with documentary videos such as Young Dublin exploring the diverse voices of youth culture in his native city in a fresh way.

His latest and most ambitious venture is a short film for Love magazine that he produced and directed himself called If You Can’t See You Can’t Be. Its theme is disability, its star a 24-year-old model, Ryan Zaman, with cerebral palsy whom he met on a dating site and with whom he now lives.

“Ryan has a strong, articulate voice and had to come out [to me] about his disability so I wanted to learn a bit more about it and create a platform that would resonate with others who had disabilities,” Clinch says, explaining how the project came about.

The pair spent two weeks in Puglia in Italy making the film with VHF and video cameras and drones.

“He was driving a 1980 Maserati on the wrong side of the road in 35-degree heat and wearing autumn/winter clothes,” Clinch recalls, adding that “I have learnt so much about disabled people over the past year, and making disability visible in fashion is doing projects that have meaning and can make change rather than fashion for fashion’s sake.”

The result is very powerful, but also celebratory, and gives moving insights into the everyday challenges facing a person with disability.

Clinch’s path to success has not always been smooth, however. He admits going through a period of despair and anxiety for nearly three years when “I didn’t want to do photography anymore. I lost interest. Every day I just got by, but it was tough. I fell out of love with photography – fashion has its dark moments and it was almost as if I didn’t want to be part of it. But I thought, why don’t I change it and not run away from it? It is my duty to try and change it.

“Fashion in the ’90s was more polished and glossed up, but now it’s more about showing things that have meaning, and that is the direction in which I am going. With the rise of social media, everyone is looking at film and video online and you have so many channels, Netflix and Amazon, so I want to be part of amplifying important voices and spreading important messages,” he insists.

That attitude is also expressed in his choice of models. “When I work with models, it is nice to work with someone who has something else going on, has something different to say. I prefer casting real people from the street, people who have quirks and are not conventional, everyday models who people think are stunning. I find a lot of people on Instagram and from agencies who specialise in models who are also artists. I try to find people with a message to tell and then pitch stories and the people to the platforms and the brands. I am still learning.”

London remains his base and though Dublin “will always be home”, part of the reason he left his native city was the bullying he suffered at school and afterwards “because I was fat and gay and didn’t go with the norm”. His parents separated when he was young, but did everything to support him. “When you are brought up in the northside, you don’t go to the southside, but discovering its creative side gave me hope and I got out of the bubble where I was born in Coolock and that in turn gave me the push to get out of Dublin. It was very narrow-minded then, but we have come such a long way since.”

His latest photographic project is a portrait of an 80-year-old model and artist called Drusilla Verney, “and we did her hair in a ’50s teddy girl vibe. She told us that her first photo shoot was in Portobello [in London] in the ’60s when a guy stopped her in the street and asked to take her photo. She said, ‘Who do you think you are, David Bailey?’ And he said, ‘Yes, I am,’ and she ended up in Vogue,” he exclaims with delight. “It is so nice when I get to choose the models. And particularly somebody like that who doesn’t give a damn. They just say how it is.”

And so does he.

See conorclinch.com To watch If You Can’t See You Can’t Be, visit thelovemagazine.co.uk