Model Travellers Paddy and Liam: ‘The clothes are nice but I wouldn’t wear them’ 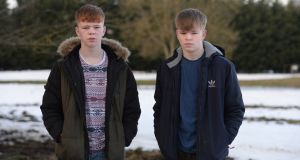 Brothers Paddy and Liam Doran, from Celbridge, Co Kildare, have starred in numerous fashion campaigns and are now the subject of a new book. Photograph: Dara Mac Donaill

Two teenage boxers Liam (17) and Paddy (16) Doran from a Traveller family in Celbridge, Co Kildare, are no strangers to international fashion.

Though still at school, they have been photographed in some of the world’s most expensive clothes from Burberry, Belstaff and Comme des Garcons to Louis Vuitton, John Smedley and Ralph Lauren.

Their many campaigns for big fashion brands include shoots at home and abroad for H&M, Fred Perry, ANC, Jil Sander and more recently Kent & Curwen in the United Kingdom in which they also appeared in a short film. Now in a further step in their career, the brothers are the subjects of a new book called Paddy and Liam by the award-winning photographer/film-maker Perry Ogden which was launched in London this week.

Ogden and I drove down to meet them at their home on a housing estate in the wake of Storm Emma with the first unbound copy of the book newly arrived from the printers that morning. On the way Perry outlines his long interest in Traveller culture, his making of the film Pavee Lackeen and how he met the boys originally when another free-spirited Kildare resident, Marina Guinness, mother of his daughter Violet, offered them a field for their horses while they waited to be housed.

Since then, he has worked with them on many jobs “and they are great to work with. They have a natural quality and are not self-conscious and for a photographer that is something special”, he says. The boys are photographed with dogs or horses or alone in the Irish landscape.

The idea for the book has been in gestation for a long time. “I started photographing them a number of years ago and later I thought these images would make a very interesting book documenting that period of their lives from 10-16, a transformative period when you make discoveries and develop passions.

“I wanted to see how they dealt with that and to reflect on the Ireland they were born into and the Ireland in which they are becoming adults – from a Catholic country to Snapchat.” The images, he says, blur the line between documentary and fiction – “it’s about setting something up and creating what Cartier Bresson called the decisive moment”.

Arriving at the house, we are welcomed by parents Tommy and Mary Doran whose younger children Tom, Christina, Felix and Que swirl around, drawing us into their cosy living room where a fire is blazing. Liam arrives, lithe and bare chested, nursing a broken wrist now on the mend while Paddy slumps on the sofa in jeans and parka.

So what do they like about modelling? “It’s good and brings us off to places and gets us out,” says Liam, the more talkative of the two. “It’s just normal for us now. But at the beginning we didn’t want anyone to know about it. The clothes are nice, but they wouldn’t be the ones I would wear – I prefer tracksuit bottoms and hoodies.

“[Modelling] hasn’t changed anyone at all and people wish us well. I’ll keep it up for the time being and boxing even though they don’t go together,” he says, adding that he has moved to Dunboyne Boxing Club “because the training is better”, his hero being the talented British puncher 23-year-old welterweight Josh Kelly. Paddy announces, however, that he has quit boxing, because he doesn’t like it anymore.

There is some banter between them about Paddy being on the cover and not Liam – who is on the back. They discuss some of the shoots they’ve been on saying that they loved the one in Connemara for Fred Perry where they were struck by “the little handmade walls – we don’t know how they stayed up for that amount of time” and the long beaches.

They remember how cold it was and the clothes – Paddy wore a black dress “he felt very free in it”, sniggers Liam. Meanwhile Liam was togged out in a tight belly top and “designer trousers that cost more than the price of our plane tickets to London ... You wouldn’t get away with it if you were ever caught wearing that around here”, he chortles. And make-up made his face “feel heavy”, he says, “though there were good girls doing it”.

The cash earned from modelling goes on jeans, hoodies, boxing stuff, shoes or games, Paddy adding drily, “or the bank”.

It quickly becomes clear that their real passion is hunting rabbits with their dogs, Master and Bitch, lurchers bred by their uncle “and the best hunting dogs in Kildare”. Lamping is an expensive sport – the lamps (which blind the rabbits) cost about €200 and the battery alone another €120 and the dead rabbits are cleaned, skinned and fed to the dogs. Paddy introduces Master, a handsome but shy grey dog with eyes only for him. Bitch charges in, sniffs everything and wheels out again.

“We have been hunting for six or seven years and go anywhere – except ploughed fields – where there are rabbits. Every night we go out we come back with at least three or four. Sometimes when the dog gets very tired, I put a collar on Liam,” chips Paddy, shyer and less chatty, but a shrewd observer.

Paddy and Liam are not the only stars in this talented family overseen with great equanimity by Mary. Their younger brother Tom (11) has appeared in a soon- to-be-released short movie called Time Traveller. “Tom is tough. He’s not afraid of anything. He’s not afraid of us,” reads Liam’s text in the book.

Their genial father Tommy is a master of many trades. A skilled craftsman, he makes traditional barrel top wagons from ash like his own father before him using little more than a few tools including a coping saw, a Stanley knife and sandpaper. Butterfly carved, they are then painted inside and out with his elaborately drawn motifs and colours.

He is also gifted accordionist, has taught Liam and Paddy how to hunt and fish, enjoys painting and decorating, and loves cooking having restored a sturdy old stove which he thinks originally came from a train. He plans to take his family out in the wagon on the road in the summer or rent it for festivals and must be one of the few left in the country who can construct these intricately made vehicles.

He shows me a miniature one expertly made of matchsticks by a cousin of his in prison. Could there be another book in the offing just called Tommy?

Paddy and Liam by Perry Ogden, published by IDEA in a limited edition of 500 is online and on worldwide retail release for €40. www.ideanow.online