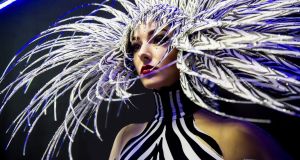 Fashion’s ability to attract crowds shows no signs of abating. The Dior exhibition at the V & A in London drew more than 121,000 people before the run was extended to September, while the blockbuster McQueen show clocked up nearly half a million visitors. These figures however, pale in comparison to the Vivid Grand Show currently running at the Palast in Berlin, where Philip Treacy’s involvement with the €12 million production - a mix of fashion, acrobatics, music, ballet, lighting and choreography - has attracted some 720,000 people, selling out every night. It continues until July next year.

“To design and direct a show of this magnitude and scale was a dream come true for me” says the Irish designer.

On the night I was there, the 2,000 strong audience comprised a complete cross section of society young and old, from teenagers to people in wheelchairs, from locals to tourists. Eighty per cent of the audiences have been German, according to Dr Berndt Schmidt, the theatre’s general director, though it isn’t necessary to speak German to enjoy this mesmerising spectacle.

The show’s “awe power” can’t be underestimated. The dancers, a troupe of 60 aged between 23 and 30 from 28 different countries, are breathtaking. The 21st-century kick line, a chorus line of 32 dancers dressed in skintight lycra all moving together in complete synchrony sporting massive electronic Mohawk style halos that change colour with every move (and costing the price of an apartment, according to Treacy, who admitted that he broke his budget “by miles”) nearly brought down the house.

The designer explained that growing up in Ahascragh, his father introduced him to the world of Hollywood movies and the legendary Flo Ziegfeld, who created stage extravaganzas from 1907 to 1931 in the US, had been a huge inspiration. “I never thought that one day I would befriend Luise Rainer, the Oscar-winning star who played Ziegfeld’s wife in the movie The Great Ziegfeld, who was my neighbour in London. She used to say to me, ‘Philip you are only interested in clamour’. She referred to glamour as clamour.” From distorted white toppers to celestial golden spikes, there are some 100 elaborate headpieces from the world’s master milliner in the show, an overwhelming display of glamour, elegance and panache.

In a city known for cultural riches, the Palast, enviably state-funded to the tune of €15 million, boasts the world’s biggest stage and the production celebrates the theatre’s centenary this year. It is directed by a woman (the first in its history), Las Vegas-based Krista Monson from Cirque du Soleil, with set design by Michael Cotten, who has worked with Miley Cyrus, Britney Spears, Katy Perry and Michael Jackson, amongst other. It’s not the first time the Palast has used fashion designers – Thierry Mugler, Christian Lacroix and Jean Paul Gaultier preceded Treacy, but Vivid is set to break all records.

The costumes by Stefano Canulli were supervised by Treacy, who was given creative freedom and a lavish budget and is justifiably proud of his achievement. “It nearly killed me but has been the experience of a lifetime and enabled me to bring my creative dream to fruition and design the look of the show with no limits, so every night at 7.30 when it begins I think of those amazing dancers and performers who inspired me and am there with them in spirit. It has been an emotional experience from beginning to end.”

Tickets from €19.80-€250 Visit palast.berlin/en. Note that a visitBerlin welcome card (€20) provides a 25 per cent discount for visitors to the Palast and many other city attractions, including public transport

‘In Ireland I’ve found another form of persecution’
10