See the most daring looks from the Grammy Awards, where statement dressing is the only rule 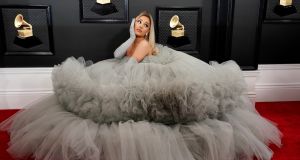 At the Oscars, Golden Globes and SAGS, the carefully scrutinised red carpets tend to be a more subdued, play-it-safe zone of tasteful, pretty dresses. But bringing the verve, and the razzmatazz, smack bang in the awards season circuit is the Grammys.

The attendees set the bar for statement dressing, and risk-taking is the only rule. The 62nd annual ceremony, which took place last night in Los Angeles, continued the outre style parade: face masks, harnesses, cowboy hats, patterned suits and pink suitcases were de riguer on the red carpet.

What other awards show would see Ariana Grande, dazzling nevertheless in a billowing tulle ballgown of gargantuan proportions by Giambattista Valli be considered almost civilian in her choice?

Lizzo worked an Old Hollywood-inspired look in white Atelier Versace paired with faux fur stole, before having multiple costume changes to perform, present and accept her Grammy awards. She was followed along the carpet by Dua Lipa in a sleek, 1990s ensemble consisting of bustier and slip skirt by Alexander Wang.

Bringing a more go-bold-or-home attitude, Pose star Billy Porter showed up in a sparkly blue jumpsuit and lampshade hat. But it was his remote-controlled fringe veil that pulled back to reveal his face, that set social media alight.

Me: I hate drama br>
Also me when there’s drama: pic.twitter.com/sCyKFgnzZK

Menswear choices ran the gamut of offbeat to out-there. Shades of pink trended amoung male attendees, with Lil Nas X shining bright with a neon-pink, heavily-embellished suit with harness, and Tyler the Creator in a pink bell-boy outfit reminiscent of The Grand Budapest Hotel.

Shawn Mendes opted for a smart pink suit, giving it twist with baroque pearl chain. John Legend’s pared back grey suit might have seem basic had it not been for the long pleated skirt attached to the left side, giving suiting a fresh take.

Singer Billie Eilish kept to her signature neon green and black in an encrusted Gucci suit, complete with fingertip-less gloves and bejewelled face mask. The singer FKA Twigs opted for a pink riding cape and embroidered catsuit that delivered on dark romance fairytale.

Model Chrissy Teigen wore a bright orange plunging dress by Yanina Couture that leaned into the puffy sleeve trend, with shoulder detail so large it was a plus-one in itself.

The usual roster of sequins dominated the Grammys red carpet too. Rapper Cardi B continued her Mugler fascination in a sheer, sexy, and sparkling cape dress that resembled a walking piece of jewellery.

Alicia Keys opted for an one-shoulder all over sequinned dress with cinched waist, and sky-high silt by Versace.

See all of the celebrity looks from the Grammys 2020 Red Carpet below:

Make-up for Valentine’s Day: a good pink will brighten every skin tone

What sold for about €500k in Ballsbridge, Dalkey, Sallynoggin and Lismore
5