She looks ‘pre-diabetic and on her way to a hip replacement’, says one mean-spirited critic 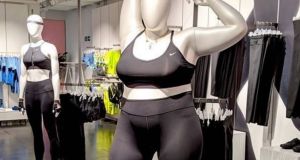 If you walk into Nike’s London flagship store, you’ll see something you’ve likely not seen before. In among your common-or-garden thin plastic models, there’s now a plus-size female mannequin in size-16 gym gear.

Substantial of thigh and soft of torso, she’s stretching as though warming up for a workout. She has also heated up the debate on body image and sport.

Nike, mindful of the fact that not everyone is a size 8, has introduced the mannequins to “celebrate the diversity and inclusivity of sport”.

But not everyone is happy about it. Critics say the mannequin, far from being a bastion of body-positivity, “normalises obesity” or even celebrates it. The “fat acceptance” movement is all very well, they say, but it certainly has no place within Brand Nike.

The so-called fat acceptance movement de-emphasises the link between obesity and heart problems, diabetes and cancer, and seeks to reassure people that they are perfectly fine just as they are.

The movement’s detractors say it offers a decidedly modern, narcissistic solution to a growing problem. In their eyes, Nike is only reinforcing this untruth.

Writing in the Daily Telegraph about Nike’s mannequin, Tanya Gold says: “She is not readying herself for a run in her shiny Nike gear. She cannot run. She is, more likely, pre-diabetic and on her way to a hip replacement.

“It worries me to see Nike, who promote athleticism, treating the obese model as potential healthy in the cause of profit.”

It’s a mean-spirited and elitist take by Tanya Gold, and one that reinforces the idea that sport and athleticism are the preserve of the “normal”, the “thin”. But it’s a mindset that also equates a small dress size with good health. By that reckoning, fatness is a moral failure. A weakness. And so it becomes a slur, and a weapon to use.

Four years ago, I was assigned by a newspaper to drop a dress size for Christmas. I lost 22 pounds in six weeks. Bitten by the bug, I continued the lifestyle for several months.

Reader, it was punishing. I cycled to and from the gym for 40 minutes a day; did HIIT or personal training sessions for an hour. I hung out of the ceiling, yelping. I sprinted, rowed or cross-trained for another 30 minutes. I juiced, I Nutribulleted, I steamed. It was utter madness. I still don’t know what possessed me.

I was as fit as an All-Black (literally; the trainer told me that one workout I completed had made Jonah Lomu faint). I was 13 stone of pure muscle. And yet, the scales wouldn’t budge. Nor would my dress size (14).

“But you’re training so hard,” the trainer would sigh, pondering the numbers that refused to drop.

After a few months, he shrugged; it was clearly my body type, my genes. But I got frustrated. Felt like a failure. And so I gave up. Because to my mind, thinness, 8 stone and Size 10 were the goal. It didn’t matter that I’d reached optimum fitness and rude health. There was only success in the numbers.

In the same gym, I’d see the model Roz Purcell; lithe and enviably lean. Only later did she admit that, around this time, her relationship with her body and food was dysfunctional. “I feel sad looking back, I wasted so many years putting myself down, missing opportunities and worst of all not being me around my friends and family,” she admitted recently.

“I know I was miserable. I resented it, I punished it, binged, threw up, purged, on repeat, while pretending everything was fine.”

If a plus-size person wants to try exercise for any reason – a fad, a lifestyle overhaul, curiosity – surely there should be a visible range of fitness gear readily available?

Here’s a radical thought: a plus-size person might not just be happier or more well adjusted than you think; they might also be fitter than you know.

But I do know the agony and anxiety of walking onto a gym floor while carrying extra weight. For years, it has been the sort of space where I felt like I didn’t belong. That I’d be caught in a Mean Girls, “you can’t sit with us” moment.

If you can at least walk into the Nike store and feel like less of an interloper, surely that’s a good thing?

The Nike mannequin isn’t about celebrating obesity. It’s offering a visual representation to a cohort rarely spoken to by the athletics industry.

There is a range of cultural, psychosocial and genetic reasons why someone might buy a size 16 pair of leggings. It’s not anyone’s business why they do it, or what they’ll use them for.

Fat shamers are constantly telling plus-sized people to work out and get healthier. The least they can do is STFU when the fitness companies think to nudge anyone over a size 12 closer to the table.