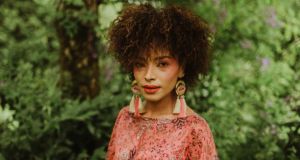 Andrea Williams: ‘Dancing translates well into modelling and when I have to work with others, I try to bring emotion into it.’ Photograph: Kate Bean

“But I just knew there was an exuberant butterfly under there too”, says Halliday, long mesmerised by the dancer’s beauty and performance art. Hours later, Williams was transformed, floating around in metallic embroidered chiffon, supersoft silks and flower crowns. “I felt like a fairy in them,” recalls the dancer who chose the music for the duration of the shoot, “and I love her clothes for their magic”.

Ethically made and ethnically inspired using gifted and recycled materials, ideas for this collection called Devi (meaning goddess in Sanskrit) finally came to fruition in the summer and were inspired by Halliday’s love of Indian and African textiles, of saris, tunics and kaftans along with associated trims, embroideries and jewellery.

Choosing the right model was key as it’s the designer’s belief that in fashion and styling, the model is more important than the clothes. “When I see Andrea move so elegantly and naturally with such rhythm and sensuality, it’s just captivating”, she says.

“To me, the skill of dance is like a superpower, like a form of flight, but it demands perseverance, discipline and strength to maintain and manipulate the body.”

Williams, who is from Cabo Verde, the Portuguese and Creole speaking archipelago in the central Atlantic, grew up in a rich culture of dance and music that incorporates African, Brazilian and Portuguese influences. Having originally studied law in Porto she moved to Ireland 10 years ago, following her husband who got a job in Cork. She has been here ever since.

A choreographer and visual artist whose dance crew Hot Sauce performed at Electric Picnic for three consecutive years, she holds dance sessions twice a week in her studio and works with teenagers from Direct Provision – both activities now on hold because of Covid. She has also choreographed a number of music videos and, in an ideal world, says she would love to work with big name musical acts.

“When people dance, they forget about themselves, forget about their shape – it’s about having fun and when you are having fun, your confidence gets a boost,” she says, adding that she tries to get Irish girls to move their bodies from their hips rhythmically like she does.

“Dancers are very aware of their bodies, very aware of how to move, how to look and portray emotion. Music is like my trigger – it brings me to another place so I can feel whatever I want. So dancing translates well into modelling and when I have to work with others, I try to bring emotion into it. You can teach people how to move, but you can’t teach them how to feel – that’s something that comes naturally to me,” she says.

Her interest in dance and music started at the age of 14 when she organised her own music and fashion shows with support from friends and local businesses, setting up a stage and creating her own sets and costumes.

Her style of dance, echoes her sartorial choices – a mix depending on her mood; in dance a fusion of Afro Brazilian hip hop, samba and Angolan kuduro and in fashion, an African headpiece with a bow one day, a rock star vibe another “but I also really like a suit and tie”. Visit her Instagram feed @andreawilliams.dancer for examples of her colourful, versatile style.

For Halliday, the collection was designed with the aim of making a striking visual statement and encouraging others to do the same.

“It was important that Andrea looked as if she was almost blooming up out of the earth with flowers. Making an effort and putting on your glad rags makes you feel great even if you are staying at home or just prancing around the garden.”

Heaven scent: It’s the best time of year to try a new fragrance

What is the going rate for a home in...Co Kerry?
8