After years of full-strength retail therapy, charity shops would be my nicotine patches 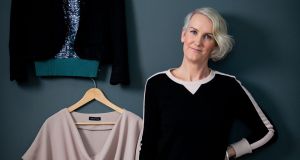 Catherine Cleary: when I was 19, I lived on tinned tuna and pasta for days so I could spend a week’s salary on a black swing coat with a high collar that felt like a hug. Photograph: Tom Honan

Hello. My name is Catherine, and I’m a hypocrite. I tell my children that they have enough, in a world that tells them there is no such thing. “Enjoy the thing you have,” I say, “you don’t need any more,” when every Lego set comes with a catalogue lighting up the yearning buttons before they’ve even burst open the bags to build the thing in their hands.

But then I skip off to the shop I jokingly call my happy place, the carefully curated rails of Cos, where the steam-ironed rows of blocky colours soothe. “This time I will make you feel good about yourself for keeps,” whispers a shirt like the one I already own. Except this shirt is hanging like art in a tranquil place, while mine is crumpled in the ironing pile. And it’s got a rounded collar, making my straight edge collar suddenly all wrong. Oh you clever Cos designers and your beguiling tweaks (that help make Karl-Johan Persson, grandson of the founder of the Swedish clothing giant H&M, an even wealthier billionaire).

“Enjoy the thing you have. You don’t need any more?” Okay. But just this one last piece of the puzzle. Wrap it up in tissue paper like a precious artefact, and add another grey ribboned bag to the stack on top of my washing machine, to be disgorged by the next vigorous spin cycle.

I’ve always loved clothes. When I was 19, I lived on tinned tuna and pasta for days so I could spend a week’s salary on a black swing coat with a high collar that felt like a hug. In truth I needed an actual hug more than I needed that “life-changing” coat, but the ambition was set in train. Future me would dress like a New York art gallery curator, in a mainly black capsule wardrobe of simple, devastatingly expensive things.

Thirty years later I have done it all, followed the arc that has brought us here to the brink of a collective nervous breakdown and the mania that is the single-use outfit. I visited garments in expensive shops until there was enough money to bring them home, knitted jumpers on a daily train commute to and from London, inhaled the giddy thrill of Zara on Fifth Avenue in the time before it opened here, bagged a Diane Von Furstenburg wrap dress for €7 in a Simon shop, and finally washed up at Cos with my middle-aged tribe trying to get a grip of myself.

But all this time and money has bought me to one insight. The wash, rinse, repeat cycle is just a variety of the same con: the delusion of a better version of yourself in a fairground mirror, where the yearning for what you don’t yet have is baked in.

This time last year I decided to stop. It’s not me, fashion. It’s definitely you and I’m taking a detox, buying nothing new for a year. Charity shops would be my nicotine patches. For a fuller hit there were the vintage shops, with fewer tags-on Primark regrets to wade through.

Last January began with a Feast of the Epiphany Women’s Christmas clothes swap and a letting go of past lives:the 1980s zip-up velvet and brocade jacket, and the remnants of the Working Girl office wardrobe, because I haven’t worked in an office for almost two decades. It was a sociable start, the itch for something new scratched with something new to me, all free and with the added benefit of getting to know a group of women better by throwing ourselves in and out of each others clothes to the appraisals of the crowd, rather than the silent mirror of a changing room. I bagged a dress from a friend that I think about fondly everytime I put it on. I’ve worn it more often than I’ve worn many a box fresh dress.

It made me think about the stranded assets that are our wardrobes, the pool of clothes that sits forgotten while we reach for the old reliables, like the jars of chutney and fancy curd that collect at the back of the fridge as we reach for the everyday butter and milk.

The matrix gets more visible when you step out of it. There are 30 days of January yoga with my hero Adriene on YouTube, but I notice she wears 30 different outfits, never the same item of lycra twice. There’s the uncomfortable challenge at the heart of fast fashion where we get to alleviate boredom or sadness or empower ourselves with clothing that’s cheap because it’s made by poor people, predominantly women. It’s not me, fashion. It’s definitely you.

Going cold turkey allows me to think about what’s driving me into the shops with their promises and hope of renewal. In June there’s a Dress for Success sale of office wear and party dresses donated to the women’s charity. It’s a heady hour of rummaging, and I buy a bargain basement bag of swag, most of which I give away again.

In Dún Laoghaire Oxfam I buy a Diane Von Furstenburg tuxedo jacket, with layered sleeve cuffs and hooks and eyes instead of buttons to cinch it all together. It’s €35, probably less than a 10th of its original price. There’s a €20 cashmere jumper, too, and the money goes to help people who need it rather than the billionaires who don’t.

Avoiding the clothes shops with their too-many choices, their strip lighting and their chemical smell of dye and bleach and plastic quickly feels like a freedom rather than a penance. On holiday there were books to read, people to watch, swims to take and runs to go on rather than clothes shops to forage through in search of a better version of myself.

As 2019 went on I listened to school children growing more articulate and angry about the world that my generation has depleted with our fast food, fast fashion, fast cars and fast news. A different momentum is building, a potentially wonderful replacement of what climate activist Naomi Klein calls the “dig and gig” economy that’s hollowing out our world and ourselves, with a “care and repair” model. Today’s 19-year-olds love your fashion, but see the ugly side of it very clearly.

“Things were so scarce here. Everything was minded,” farmer Oliver Nagle told a group of us on a tour of his farm in the Burren in October. Scarcity meant the stone walls around him were built with stones piled on their ends rather than lying flat. There are nine ways to lay a stone, he told us. His father taught him that when you picked one up you didn’t put it down again until it was in the wall. That way you made it fit and the wall grew up to your waist as fast as you could get it, full of holes to let the wind through.

Ingenuity, self-reliance and craft. Deep wells we feel we don’t have to dip into anymore in a “don’t think, just buy” economy. But we are ingenuous creatures, brilliant at sabotaging ourselves, turning the thing that once sparked joy into the clutter we need to free ourselves from. And the momentum builds and the yearning is ceaseless.

As the weather cooled I discovered the joy of shirts and jumpers, shirts and dresses, layers of things I already owned, shopping my own wardrobe, thinking, not buying.

Scarcity is something to which no one wants to return. But if things aren’t scarce, can we return to valuing them? How do we put the brakes on when abundance is all we see?

These are the thoughts I woke up with as the seasons changed, and the conversations I had with increasing numbers of people as the year went on and we started to rub the sleep out of our eyes and hear the rattling clanking death-by-consumption runaway train we’re riding.

I finished the year with a third clothes swap. “I’m not buying anything new for a year,” another fashion-addict declared, an Ikea bag stuffed with once-loved stuff. I ended the year of unplugging with my yearning for charity shops on the wane. I’ve unwired the buttons. They no longer respond to being pressed.

I bagged my seasonal party outfit in that last clothes swap, trousers and a sparkle sequin top, a perfect match for the Oxfam tuxedo jacket. The plenty of enough is a different kind of addictive.

My social media feeds fill up with people doing similar detoxes. Putting the fun back into fashion has been the mission of Taz Gallagher and Geraldine Carton, who set up Sustainable Fashion Dublin, hosting clothes swaps, charity shop crawls and mending workshops. My year-long fashion detox ended by downloading Nu Wardrobe, a clothes sharing app from young social entrepreneurs Aisling Byrne and Ali Kelly, as actor Jane Fonda declared her Neiman Marcus red coat is to be the last item of clothing the 81-year-old would ever buy. A human being, not a human buying.

Slow, swapped, sustainable fashion is my new black, along with a whole new generation rummaging through the baskets in the Simon shop. These sparks of joy might not burn the whole place down around our ears.