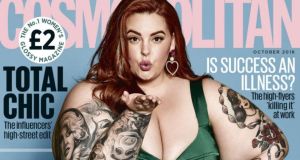 Tess Holliday: ‘Worry about what horrible people you are by whining about how me being on the cover of a glossy magazine impacts your small minded life’

The world’s biggest female tennis star gets told off for wearing too much clothing on the court. An Australian study finds that girls as young as eight are suffering from poor body image. Now, in the latest salvo in the relentless war on body positivity, a women’s magazine is accused of peddling obesity after it features a plus-size model on the cover.

The current issue of Cosmopolitan magazine has American model Tess Holliday, who is a UK size 26, on its cover, along with the strapline: “A Supermodel Roars: Tess Holliday wants the haters to kiss her ass.”

Since it hit the shelves last week, the magazine and the model herself have been both praised and condemned: lauded for the public statement of acceptance that women come in all shapes and sizes, excoriated for the outrageous implication that Holliday’s body shape might actually be attractive.

The TV presenter Piers Morgan – who, conveniently, has just returned to the couch at Good Morning Britain after the summer break – immediately took to social media to voice his outrage. “As Britain battles an ever-worsening obesity crisis, this is the new cover of Cosmo.

Apparently we’re supposed to view it as a ‘huge step forward for body positivity.’ What a load of old baloney. This cover is just as dangerous & misguided as celebrating size zero models,” he wrote on Instagram.

Holliday responded on Twitter: “To everyone saying I’m a burden to the British health care system, I’m American so you don’t have to worry about my fat ass. Worry about what horrible people you are by whining about how me being on the cover of a glossy magazine impacts your small minded life.”

To be fair to Morgan, he’s just echoing the feelings of many. Lots of people on social media expressed concerns that, by putting Holliday on its cover, Cosmopolitan was promoting an unhealthy lifestyle, and suggesting that obesity is desirable.

Phew, I’m literally a COSMO GIRL!! Can’t believe I’m saying that! 😭😭
Thank you @CosmopolitanUK for this incredible opportunity 🙏🏻 If I saw a body like mine on this magazine when I was a young girl, it would have changed my life 💕
Issue hits stands 8/31! 🎉🎉🎉🎉 pic.twitter.com/sBYWY7nEwZ

Sorry, but 5ft 3in & 300lbs is NOT a ‘positive body image’ to celebrate on the front cover of a magazine as Britain suffers from an ever-worsening obesity crisis. ⁦@GMB⁩ pic.twitter.com/CwvOQtsOrA

this is exactly what the fashion industry should be doing to combat anorexia. Seeing more people with other body types like this makes girls realize they don’t have to be a specific weight to be considered beautiful or be on a magazine cover how is that even remotely terrifying? https://t.co/FJydpYgRe7

Some people’s stories and strength of spirit are too important to ignore. Tess Holiday’s story is about so much more than her body. Please read it, pass it onto women you know and realise that the secret to surviving in a tough world is by being even tougher pic.twitter.com/w0KqouoBnI

26-year-old plus-size model Tess Holiday is on the front cover of the Cosmopolitan magazine. The magazine hopes the image will inspire readers to be confident about their body. What do you think? pic.twitter.com/XUwiJ9Mpc6

Tess Holliday speaks to Roisín Ingle on The Women’s Podcast

A poll run by Good Morning Britain today is asking: “Is plus-size model Tess Holliday’s front cover image on Cosmopolitan magazine a positive body image?” At the time of writing, about 77 per cent of the respondents had voted ‘no’.

As Morgan concedes in his Instagram post, magazines have always promoted extreme body shapes and extreme ways to get them. (I’m old enough to remember a time when magazines promoted fad diets based on amphetamines and a diet consisting only of protein shakes.) But, along with all the other outraged commentators on social media, I think he’s missing the point.

The message here isn’t about contesting medical science, which is clear on the widely accepted health risks of excess body weight. It’s about challenging our perceptions of beauty.

Holliday, who was behind the #effyourbeautystandards campaign on Instagram, said in an interview with Good Morning America that her goal isn’t to celebrate obesity; it’s to promote the notion that women should love themselves as they are. “I’m not recruiting people – I’m telling them to love themselves and it just happens to come from a bigger body.”

In truth, what the detractors seem to be most offended by isn’t Holliday’s size. Rather, it is the fact that she’s not only refusing to apologise for it; she’s revelling in it. She’s not curled up in a corner, bent double with shame and self-consciousness at her crime of taking up more space on the planet than the average human. Look at that face – she knows what the trolls on social media are going to say about her, and she is choosing not to care.

Let’s face it, no-one actually believes that girls and young women will pick up their copy of Cosmo, and just like that, decades of “thin is beautiful” conditioning will fall like scales from their eyes, and they’ll promptly decide that Holliday’s is the body shape they want to emulate.

Instead, it might just make the ones who do not look like the size 4 models on the cover of every other magazine in the developed world feel momentarily better about it.

None of this is to suggest that obesity rates are not a serious public health issue. But shaming people who don’t fall within the normal BMI range is not going to help tackle it. After all, it’s not body fat itself that makes so many young people miserable, too embarrassed to exercise or seek nutritional advice. It’s society’s attitude; it’s the way people who are overweight are nagged for not going to the gym, and then taunted when they do.

The message of this cover is not that we should all try to look like Holliday. Rather, it’s that there is more than one way to be a woman, and we should celebrate our bodies whatever their shape.

In a culture where the Kardashians are promoting appetite suppressant lollipops to children, and girls as young as eight are putting their selfies through apps designed to plump their lips, widen their eyes, and narrow their waistlines, that message is practically revolutionary.

The difference between Holliday and a Kardashian is that she seems to be genuinely joyful about her appearance. Unlike most of today’s bloggers and influencers, she is not promulgating a lifestyle where women’s bodies need to be starved, subjected to punishing exercise regimes, injected with poison, cut, sliced, lasered, lifted, nipped, tucked, filtered and airbrushed into submission before they are deemed attractive.