Being a woman in business, I’ve had to ‘pitch to the boys club’ 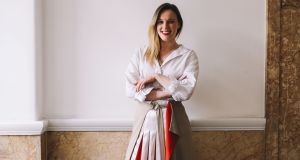 Being a woman in business has meant ‘pitching to the boys club’, says Aisling Byrne.

It’s easy to adapt your beliefs, much harder to adapt your behaviours, but meet Aisling Byrne and you’ll feel like somersaulting into a whole new lifestyle. The founder of Nuw (formerly The Nu Wardrobe) is so passionate, it’s catching.

We meet in Dublin on a blustery Friday. She’s wearing a gorgeous, flowy dress. “Yeah, this is off the platform,” she smiles. That means it’s borrowed. At Nuw, nothing’s for sale, everything’s for share. Think an online clothing store minus the guilty buys and impulsive overspends.

Download the app, create your profile, upload a “high-quality but under-loved” item of clothing, and you’re connected to a whole new wardrobe – from Byrne’s high-end Preen dress, to high street items. You share (via in-person meet-ups), wear, clean and return. Membership costs €8 a month, or €35 for six months. It’s a sustainable, affordable alternative to fast fashion, which has also created a like-minded community.

“The people who convert the quickest have a real belief that the fashion industry needs to change. And there are lots of feminist tones within it,” Byrne says. “I guess women have always had a contentious relationship with fashion. We love it but it actually makes us feel so bad. So, Nuw is a really nice community for women to support women.”

A garment complex in Bangladesh collapsed, resulting in 1,134 deaths. That put a global spotlight on the industry . . . it broke down the glamorous facade of fashion

Byrne, who is 26 years old and from Malahide in north Dublin, never thought she’d end up in business. She gave it up at school “because I thought business is so boring!” She preferred art and music, which she studied at Trinity. As a student she was an avid shopper.

“I’d go to fast fashion brands because I couldn’t afford anything else. I spent a Christmas working at Brown Thomas and the staff discount was the best thing ever for me. I’d spend most of my pay cheque buying things just because I could.”

Then in 2013 a garment complex in Bangladesh, the Rana Plaza, collapsed, resulting in 1,134 deaths. “That put a global spotlight on the industry . . . it broke down the glamorous facade of fashion.”

Later that year, Byrne travelled to India with the educational NGO Suas. She worked in schools with children who would otherwise have been day labourers. She was also struck by the pollution.

“We were in Champahati, which is outside the city, and there was still so much plastic pollution flowing into these beautiful rivers.” It brought home to her “the stark realisation that our consumption habits affect people in other parts of the world, and have such a devastating impact.”

The biggest revelation came at a clothes market. “Before I went over I had heard about this market where the fast fashion brands sold their items at knock-down prices. I thought, this is amazing. I’m going to get all this stuff and it’s going to be so cheap. But I had spent the summer learning about everything that was happening [in the fashion industry]. When I got to the market, I’ve never felt so sick.”

Looking at all the clothes, she thought of all the resources that go into making fast fashion, and “all the people who have been mistreated to get it here . . . I was excited about how cheap it was going to be for me and had never considered this invaluable and intangible cost that was people and their wellbeing and the lives they would or wouldn’t get to live because of this.”

When Byrne returned to Ireland, she was “a downer person to be around”.

“I was frustrated because I still wanted to enjoy fashion and I was annoyed that I was complicit in a system that I didn’t agree with but didn’t feel I had power to do anything about.”

Ethical and sustainable issues can be overwhelming and subsequently paralysing, Byrne says. But she was determined to do something, no matter how small scale, to encourage people to change their attitudes and behaviours. A few months after returning from India, she was laying the groundwork for what became Nu Wardrobe. Nuw has since launched in London, Cambridge and Dublin.

Every time I think it’s about to end, something happens. It’s actually just about getting up every day and turning up regardless

There have been naysayers. Being a woman in business has meant “pitching to the boys club”, she says. “You’d be in a room with three men who are talking condescendingly about your ‘little project’. And you’re like I’ve come in here with a business plan. Are you joking me? What a waste of my time.”

But there have been plenty of people who have pulled her up, too. As one female founder advised her: “I’ll help you. You’ll help someone else. We’ve all got to help each other.”

Byrne started her business as part of the New Frontiers project for entrepreneurs, funded by Enterprise Ireland. She’s been chipping away for years; growing tough and savvy.

She believes “business in the way we see it today needs to change” – that it is possible to be both profitable and ethical at the same time. Still, she sometimes feels she’s in unknown territory.

“There’s always parts where you think this is the end.” A few years ago, she found herself running out of funds, convinced the business was going to fold. Last minute, she entered a competition for climate innovators run by Climate-KIC, which she won, then shortly after got a place on the Bethnal Green Ventures tech for the good accelerator programme.

“Every time I think it’s about to end, something happens. It’s actually just about getting up every day and turning up regardless. Because I’ve done that every other time and that’s why it keeps going.”