Don’t want to be married by a priest? Call the solemniser

With nearly a third of all marriages in Ireland now taking place in civil registry offices, couples are looking for new ways to make their ceremonies meaningful 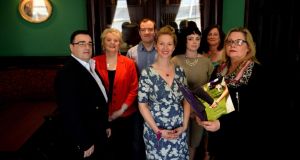 Druid ceremonies, hand-tying, sand-pouring ceremonies, candle-lighting ceremonies, St Brigid’s Well water in chalices, jumping the broom, story-telling and other marriage traditions with pagan roots are becoming popular as more weddings go hippy chic. With nearly a third of all marriages taking place outside of churches in civil registry offices, couples are looking for new ways to make their ceremonies meaningful.

Other couples who don’t want to get married in a church, still want all the associated pomp and circumstance – walking down the aisle, white bridal gowns, vows. Many solemnisers licensed to marry couples in secular settings have waiting lists stretching to 2017. They include Pagans and Druids (both considered official religions) and Humanists (licensed as secular solemnisers).

“Sadly we have to say no to hundreds of couples,” says Brian Whiteside, who represents the Humanists. “If we had a large list of solemnisers we’d be doing 2,000 weddings a year, and that’s 10 per cent of all weddings. It’s such a growing market we can’t keep up with it.”

If the marriage equality referendum passes, the demand for marriage solemnisers will boom, putting pressure on an already strained market.

Enter the “celebrants” in training, lay people who are learning with a mixture of theatre training and pop psychology to become convincing masters of ceremonies at weddings that are similar to church services, but without the church.

If you’re considering this for your own wedding, there is an important distinction between a “solemniser” and a “celebrant”. Solemniser is the legal term for the 5,627 people licensed by the State to conduct weddings. Apart from 107 civil registrars around the country, they include 5,506 religious in three main groups, Humanists, Spiritualists and Interfaith, charging anything from €350 to €500, plus expenses.

They can solemnise weddings, which means you don’t have to go to the registry office first. They also counsel the couple beforehand, guide them through designing a personalised ceremony.

As Whiteside puts it, “We are empathetic, articulate, reliable and have a sense of occasion.”

Enda O’Donnellan, an osteopath from Slane, Co Meath is one of 12 Interfaith solemnisers and conducts about 15 weddings a year.

Recently he turned down three couples because in exploring their strengths and weakness he felt they were ill-matched. He has introduced specially designed “male and female” pairs of chalices filled with “holy water” from St Bridget’s Well in Dundalk. “Quite a sensual ritual,” he says. “The ceremony is very personal and tells the story of the couple,” he says.

Celebrants, on the other hand, are not entitled to solemnise a marriage and the term “celebrant” is not legally recognised. Celebrants basically MC the wedding celebration in an appropriately solemn yet joyful fashion, which is taught by the Irish Institute of Celebrants. These are nonlegal ceremonies in buildings open to the public, such as hotel s and historic buildings. (Back gardens and beaches are not allowed by the Department of Social Protection and the HSE.)

The nonlegal status of celebrants is something Lorraine Mancey O’Brien, a lecturer in gender studies at the school of justice at UCD and founder of the Irish Institute of Celebrants, would like to change as. With potentially thousands of same-sex weddings coming on stream, there is a market for it. And she makes the valid point that a couple shouldn’t have to embrace Humanism, Spiritualism, Interfaith or any of the other many approved religious categories of solemniser in order to be legally married outside a registry office.

O’Brien says many of the nearly 7,500 couples who solemnise in a registry office annually are unhappy with the “Monday to Friday” rule of registry office weddings. They could be marrying on a Tuesday morning, she says, when what they really want is “to walk down the aisle, have music, readings and be in a venue where friends and family can share their special day”.

She would like her group of “celebrants” to be allowed to become secular solemnisers. The first “secular” group to be allowed solemnise were the Humanists, who earned the right in 2012 championed by Ivana Bacik. Its 19 solemnisers are fully booked for 2015 with 1,300 weddings, up from 400 in 2013 and 100 in 2014.

“You don’t have to be Humanist to be married by a Humanist. We give a voice for people who are not religious and don’t want to wear any badge, and we help the couple to marry in a very personal and meaningful way, with ceremonies like hand-tying.” This is where ribbons of different colours representing various qualities are tied around the couple’s arms and it’s where the expression “tying the knot” came from.

The Spiritualists Union of Ireland, founded in 2010, have been entitled to solemnise weddings since 2011 and will be doing 3,000 weddings in 2015, with bookings into 2017. Miriam Fitzgerald, its spokeswoman, has done hundreds of weddings. The religion’s founder, Tom Coulton, was sentenced to prison recently for stealing more than €300,000 from a vulnerable elderly couple, but Fitzgerald says, “Tom is only one of us – there are 15 of us.”

Fitzgerald, who has an MA in gender studies, is hoping the referendum is passed so that she and other registered solemnisers can conduct same-sex weddings.

“We are cross-faith – we’ve married Muslims and Catholics, Jews and Catholics . . . we focus on the couple. Our religion is based on love, and love is an energy that can not be created or destroyed,” she says.

WHY I WANT TO MARRY YOU

Aspiring lay celebrants with the Irish Institute of Celebrants:

Mary Grant (50s), Bray, Co Wicklow, former customer service representative “I love the idea of people coming together in love. I have a gay daughter in a relationship for 11 years, and it’s nice to know there will be somebody who can officiate at their celebration of marriage. They have had a rough time, with a serious health issue, and they are the epitome of a loving couple.”

Chris Gordon (31), Dublin, employer and entrepreneur “I was asked twice by friends to be celebrant at their weddings. I am passionate about it. Friends of mine are getting married next June.”

Christine McQuillan (36), herbalist and DJ “I had attended wedding celebrations following registry-office ceremonies, but for some family members there was a sense that it was not a ‘real wedding’. It was associated with hippy weddings in fields. Having a secular organisation gives an authoritativeness and respectability to the wedding, and it is acceptable to the broader family. It’s not so airy fairy.” She has an interest in traditional Irish pre-Christian customs, such as handfasting, which was part of the Brehon Laws.

JP Connolly (49), Kilkenny, guidance counsellor with young offenders “It’s a joy to celebrate where people come from and their achievements. With traditional weddings, I felt there were limitations and restrictions everywhere I looked . . . I am a very good listener, I like to hear people’s stories and to celebrate people’s real lives. I enjoy hearing and retelling the story of how a couple met.”

Susan Ryder (63), Malahide, decluttering advisor, real estate investor and former Olympia Theatre barmaid “I am gay and came out at the age of 48. I would love to be part of that to see people married. In churches, you don’t get what the couple really want. I looked into the Spiritualist Association and the Humanists but I don’t share their points of view.”