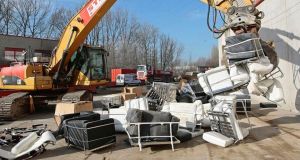 This is what it looks like when your chairs aren’t considered good enough to sit on. Their crime? The chairs are being destroyed not because they were uncomfortable but because they were replicas of a design by architect Le Corbusier and someone had tipped off the police in Geneva to their lack of provenance. While they had occupied prime real estate in the lobby of a bank, under the EU intellectual property (IP) law they contravened the designer’s copyright, which is in situ for 70 years after the architect’s death, in this case until 2035.

Copies of designer furniture are often described as being “ inspired by”, “reproduction” and “in the style of” and cost a fraction of the original. To the untrained eye they may look good but won’t hold their value the way the originals do. Nor does the retailer pay a percentage of its profits to the designer, or their heirs, in the form of a royalty, Helen Kilmartin of Minima explains. She is blogging about the need for better policing of the issue in Ireland. She is not alone. “Fight the fakes” is an editorial stance taken by interiors bible Elle Decoration UK. In a blog its editor, Michelle Ogundehin, recently chastised the British prime minister’s wife, Samantha Cameron, who works for luxury brand Smythson, for buying a rip-off of a 1962 Arco lamp by Achille and Pier Giacomo Castiglioni – for about a fifth of the price of an original.

Ogundehin called her “cheap, hypocritical and fake”, writing: “That’s all we need, the endorsement of faux-furniture by the prime minister’s wife.”

So how can you ensure the designer furniture you’re buying is the real deal? “Ask the retailer for evidence of its authenticity, question the finish and the price,” Colleary counsels. Ask yourself, “Would a normal person, not a design expert, confuse the two?”

There is no doubt the original licensed pieces cost more but in Ireland’s Year of Design we should be supporting original ideas, even if we have to pay extra, says Kilmartin. =