Dingle peninsula: magic and fear at ‘the end of the world’ 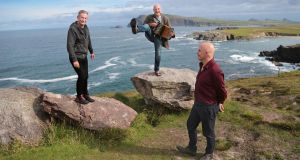 With beguiling simplicity, Seamus Heaney once described the weather on the Dingle peninsula as “loud”. It certainly can be, but it is never loud enough to drown out the music and the poetry, which is carried on the winds blowing in off the Blaskets or on the waves that wash the long, white sands of Inch.

This stretch of elemental coastline, with its sheer cliffs, black angry seas and gently sloping sands, is beloved of the music- makers and the dreamers of dreams who have come here for generations.

It is special, mystical even. Few people know better than box player Breanndán Ó Beaglaoich just how special it is. He is one of the most highly regarded trad musicians in the country. “There is a draw the peninsula has that it indescribable,” he tells me as we climb a boggy hill near his home about 16km outside Dingle town.

“There was a time when this was the end of the world, and if you went any further you fell,” he says as we reach the crest of the hill and look out over St Brendan’s Creek, the dark, unforgiving inlet where the saint set off on his perilous voyage to the new world in the sixth century.

“I hate this place,” says Ó Beaglaoich unexpectedly. “I hate it because I can’t live anywhere else, and, believe me, I have tried. I am not alone. The people who settle here have been out in the world and have chosen to come back.”

He took this advice until he turned 18, when he first took to the water. He now swims year-round from this rocky shore. Last year he took a currach, known locally as néamhóg, around the Irish coast to the furthest reaches of Scotland. He retains a fierce respect for the powerful currents that swirl around the peninsula. “The sea is the master. You follow the sea.”

Ó Beaglaoich points north toward a rocky outcrop. “That there is the cliff of widows,” he says. “On a rough day there is a freak wave that comes in, we call it Ithe an Chuasa, or the eating wave. It has taken three people in my lifetime, men fishing off the rocks who were just washed away. None of them were ever found.”

It is not just locals who are drawn to this peninsula. Philip King, musician, broadcaster, film maker and curator of the Other Voices music festival, was born in Cork and lived for nearly 20 years in Dublin before settling here, at the foot of Mount Eagle (“the end of Ireland”) 28 years ago.

Every time he rounds the bend outside Castlemaine and catches a glimpse of Inch Strand, he knows he is back in his own place. “Sometimes it is calm, sometimes it is rough – just like life itself.”

As we drive from Dingle to Ventry, we reach a hill’s peak and the Great Blasket comes into view. The last inhabitants left the island 60 years ago, and just 12 people who were born there are still alive. Ó Beaglaoich and King discuss how the Blaskets could be reimagined, but both believe it is likely to remain the preserve of hardy campers and less hardy day-trippers.

On the narrow roads around Slea Head we meet a bus. A huge number of tourists traverse this peninsula each summer day. The driver slams on the breaks and looks at us, irritated. We are blocking his progress. We have no choice but to reverse around several hairpin bends. We pull over and get out of the car briefly to wave at the American passengers, who are delighted with this Irish moment.

While we are standing there, a young man tells us two hump-backed whales are in the water off Inishvickillane. The Inis, as islanders referred to it, was the first of the Blaskets to be deserted by locals and the first to be resettled when Charlie Haughey built a holiday home there in the 1970s.

We drive on to the village of Dunquin. The roads into and out of the tiny town offer stunning views of Clogher Beach and the Three Sisters mountain peaks.

The highest of these sisters is Binn Diarmada, where, legend has it, Diarmuid and Gráinne slept while on the run. It also played a bit-part in a more recent historical event, when Lindbergh flew The Spirit of St Louis across the Atlantic in 1927. The Three Sisters were the first bits of Europe he saw.

As we look out over the ragged coast, Ó Beaglaoich plays Port na bPúcaí or Tune of the Ghost, a haunting melody said to have been given to the player by the wild Atlantic waves. It is a magical moment.

He stops and we look out over the foaming water to Tearaght, the rocky outcrop that was the last light of Ireland many thousands looked on as they emigrated, from Famine times up until the 1950s. Farther away, barely visible in the misty haze, is the ancient monastic site of Skellig Michael.

King points to it, then gestures towards the island closer to shore known – because of its shape – as the Sleeping Giant. According to legend this rocky giant will only rouse himself at Ireland’s call, when the country needs him most. “Maybe he needs to wake up now,” says King quietly.

The coastline is dramatic, with steep cliffs, long sandy beaches and two sand spits – Inch to the south and the Maharees to the north. Off the west coast lie the Blasket Islands, uninhabited since the 1950s. The peninsula ends just beyond Dingle town, at Dunmore Head.

Dingle town, home to Fungi the dolphin, a lively pub and trad scene and good restaurants, just about retains an old Irish feel.


Attractions and activities
Among Dingle peninsula’s main draws are authentic traditional music, dance and poetry. For good music sessions in Dingle, try O’Flahertys, An Droichead or John Benny’s, located near the pier.

The village of Annascaul has become known in recent years as the birthplace of explorer Tom Crean, the South Pole Inn, the pub he ran after he returned from the Antarctic, is worth a visit. From there, Inch beach, one of the locations in the film Ryan’s Daughter, is close by, while Castlegregory is also a popular beach. Both have good conditions for surfers and windsurfers. Kayaking, surfing and paddle-boarding are available through Jamie Knox Watersports in the Maharees.

For diving enthusiasts, Water World (waterworld.ie) in Castlegregory is one of Ireland’s oldest family-run diving centres and they organise trips to the Maharees Peninsula and also offer power-boating courses.

For food lovers, Murphy’s Ice Cream in Dingle sells interesting flavours, including brown bread, marmalade and sea salt. Doyle’s Seafood restaurant and Out of the Blue are two of the other favourite dining options. Ashe’s Bar is an excellent mid-market option. Elsewhere on the peninsula, try Ida’s restaurant in Ballydavid, or Tigh Áine overlooking Clogher bay. There are many appealing traditional pubs in Dingle town, including Dick Mack’s and Foxy John’s.

The traditional departure point for trips to the Blasket Islands (blasketislands.ie), lying three kilometres off the coast, are from Dunquin, and some tours incorporate whale-watching, swimming, painting and hill-walking. There’s an excellent visitor centre about the islands at Dunquin. Boat trips to see Fungi the dolphin, with sightings almost guaranteed, can be booked in Dingle town.

Dingle Regatta this Sunday and Monday mixes traditional boat skills and competition with entertainment at night.

‘Once you are not lily-white or freckle-skinned, you are labelled as non-Irish’
Real news has value SUBSCRIBE