Despite poor broadband, rural Ireland is embracing the tech revolution

Sign of the Times: Urban-rural divide evident in consumer confidence, technology use and religion 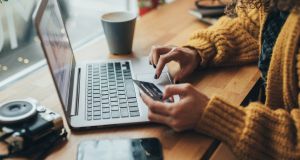 For buying goods and services online, rural dwellers are ahead of their urban counterparts. Photograph: iStock

The results of the 2019 Sign of the Times survey by Behaviour & Attitudes are published by The Irish Times on Saturday. The annual snapshot of Irish life combines quantitative and digital qualitative techniques with B&A published data on the economy, health, technology and shopping. The research was conducted in January and February 2019.

Three issues that leap out of the Behaviour & Attitudes Sign of the Times survey 2019 concern Ireland’s urban-rural divide: technology; confidence in property prices; and religion.

Urban dwellers are more confident that their assets – the price of their house, savings, pensions and shares – will have a higher value next year.

In Dublin 28 per cent of those surveyed feel their assets will rise, while outside Dublin the figure is just 17 per cent.

Overall, 27 per cent of people feel their asset prices will be higher next year, some 67 per cent expect them to be the same, and 6 per cent feel they will be lower.

In terms of consumer confidence the picture is more varied across the regions. Overall, 26 per cent of respondents expect the country to be better off next year, a further 50 per cent think it will be about the same, while 24 per cent believe the country would be worse off.

Opinion is divided regionally, however, with 11 per cent of respondents in Dublin saying they think the country will be better off, and 10 per cent in Munster – home to the urban concentrations of Cork, Limerick and Waterford – still believing things would get better.

Confidence in the economy falls into negative figures in Leinster (excluding Dublin) and more severely in Connaught / Ulster.

Ian Mc Shane, executive chairman of Behaviour & Attitudes, believes people in these regions feel they didn’t experience much of the economic boom and are not experiencing much of the recovery now.

The Republic is also somewhat regionally divided on the issue of religion. Asked if they agreed with the question that “religion does more harm than good” the views of adults aged over 16 were polarised.

Some 35 per cent of respondents feel religion does “more harm than good”, while 36 per cent thought the statement was incorrect. The number who were neutral was 29 per cent.

In rural Ireland the picture is a little different where some 57 per cent of “farmers” disagreed with the proposition that religion does more harm than good.

Attempts to get a comment from the IFA in relation to the findings were not successful at the time of writing. A spokeswoman for the Catholic Communications Office said as it had no detail on the survey it could not comment on the results.

The finding that rural people have marginally more online digital devices including smart televisions, than their urban counterparts, is a little surprising, given the dire perceptions of broadband availability in rural Ireland.

Even allowing for statistical anomalies, rural Ireland is largely on a par with urban areas – and possibly more advanced – in technology usage.

For example, when it comes to buying goods and services online, rural dwellers are ahead of their urban counterparts. In a basket of 10 things to buy online, people living in rural areas come out on top seven times, and draw with urban dwellers once.

The only areas where urban dwellers are more active shopping online are in groceries and medicines.

In relation to the number of devices per household, 30 per cent of rural dwellers say they use apps on a smart TV, compared with 19 in urban areas.

In the use of smart TVs that connect to broadband, the figures are almost identical. Rural dwellers may slightly outperform city residents in the use of games consoles (37 per cent to 35 per cent, though the margin of statistical error makes these, again, a dead heat).

Urban and rural dwellers have similar ownerships of streaming devices (roughly 90 per cent in both cases) and internet access is also broadly similar (76 per cent in urban Ireland, 74 per cent in rural areas).

Going by these figures the perception of a large swathe of rural Ireland as a technological black hole does not appear to be supported.

However there is an urban-rural technological divide that the survey does not expose. Séamus Boland, chief executive of Irish Rural Link, says “speed and reliability”, less than internet access, are the key issues in rural Ireland.

The speeds, he says, could be as low as one to 1.5 megabits – sometimes enough to watch a video and go online, but “painfully slow”.

In Moate, Co Westmeath , where Irish Rural Link is based in an industrial estate, access to the internet was not available for two days last week. “You can’t run a business like that,” says Boland.