Dermot Healy was afflicted with an unruly mind

In his most famous work, A Goat’s Song, he excelled himself in revealing the Irish male as the dreamer, the broken thing that a man becomes when the women have gone away 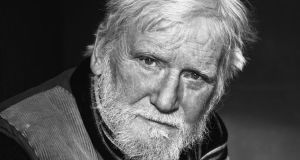 Dermot Healy: love was the root of his books

I tell a story sometimes that I heard from Dermot Healy. He went into an old bachelor one day. “Do you not be lonely sometimes?” Dermot wondered.

To which the man replied, “No. Sure I know I’m always here.”

It’s a story with a universal truth; that in our sitting and solitude we are conscious of something beyond the narrow scope of the ego. A bigger mind inhabits us and observes our ego’s passions rise and fall like the swell of the ocean.

It’s the wisdom of Zen, but it is also to be found in the exuberance of Irish poets, from the minimalist luminosity of the 12th-century bards to the glory days of south Ulster poets such as Cathal Buí MacGiolla Gunna, Art McCooey and many others, and right down to Patrick Kavanagh, who still carried the flickering lantern of those ancient muses in his poetry and lit the way for Dermot too. Dermot was afflicted with an unruly mind that could never quite attend to the mundane because of the sacred anarchy beneath the surface of everything, which drew him in and allowed him to write such viscerally beautiful poetry and prose.

I remember when I was 14 going into a little cafe in Cavan, where he lived, to meet the 20-year-old, who even then was acknowledged as a great poet. I was terrified.

His mother said he wasn’t out of bed, so I waited in the empty restaurant as sun broke in through the amber glass of a high window. He arrived with a big smile. It felt like I was being hugged when he looked at me.

One day he came to my mother’s house to bring me out to dinner with some very important people. When I tried to get into the car there was a pot of curry on the passenger seat.

Nobody knew if Dermot was coming or going. I remember drinking with him in Blessings Bar one night. At one stage he slipped out. I thought he was gone to the toilet. But he was over in the Farnham Arms having another life with someone else. When he appeared again I said, “You were a long time in the toilet.” He said, “I’m across the road. Finish your drink and come over.”

A leader of Irish writers

Dermot led people and people were glad to be led. But when it came to literature he was the hidden master in the Irish school, quietly encouraging other writers, masterfully critiquing their work, and pushing new boundaries in his beloved magazines, Force10 and the Drumlin.

Dermot took up where Liam O’Flaherty had left off, weaving into human stories the narratives of dogs, donkeys and other animals. In his work even the birds are held up in the sky, and they lift and swoop in an unpredictable weave of anarchy and love.

Love was the root of his books. And in his most famous work, A Goat’s Song, he excelled himself in revealing the Irish male as the dreamer, the broken thing that a man becomes when the women have gone away.

So it was a joy to know he was safe in Sligo for so many years with a beautiful woman by his side, and the ocean throwing winter waves at him with the same unexpected roguery as his sentences followed one after another. He told me once it was hard to write in a beautiful place. “The waves,” he said, “draw me in.”

I saw him last December at a gig he organised to raise money for victims of weather in the Philippines. I saw him do an impromptu sean-nós dance on the floor as the band played. And he whispered in my ear. “The waves,” he whispered. “Watch out for the rogue wave. It’s waiting for all of us. It comes on your blind side. Just as you’re casting.”

I suppose the sea overcomes everything in the end. Movement overpowers words. Love destroys thinking. And the world is held in the loving embrace of its own form. I think that was the story at the heart of all his writing. And as such it was the most eloquent celebration of heaven in the ordinary that has come from his generation of writers.

He told me once that prose is poetry in the sense that a bird is still a bird when it sits still. And the last image he flung at me, with the glee of a Zen master, his eyes hugging me, his wisdom falling like rose petals from a teacher’s hands was this: “If you want to break a dog’s heart,” he whispered, “throw a stone into the sea.”