Crowds flock to first day of Bloom in the sun

Garden designer Andrew Christopher Dunne from Clogherhead in County Louth has been named as the overall Show Garden winner at Bloom 2018 for his ‘Sustainable Seafood Garden’ in association with Bord Iascaigh Mhara. Video: Bryan O'Brien

President Michael D Higgins and his wife, Sabina, with Andrew Christopher Dunne, overall winner of Bloom with his creation, The Sustainable Seafood Garden, in the Phoenix Park. Photograph: Cyril Byrne / The Irish Times

President Michael D Higgins said Bloom marked the start of summer when he performed the official opening of the annual festival of food and gardening at the Phoenix Park on Thursday.

Several brave school teachers had brought classes to Bloom on a day trip, and marshalled the children around the busy festival with a skill the President’s aide-de-camp would have been proud of.

“Bloom is now firmly established as the announcement of the summer to come,” Mr Higgins said. The five-day festival, run by Bord Bia, is now in its 12th year.

Mr Higgins, who donned a white sun hat for most of the day, was accompanied by his wife, Sabina.

The pair ping ponged through the show gardens, with a small team of handlers and security, as countless visitors tried to get a handshake or a selfie. 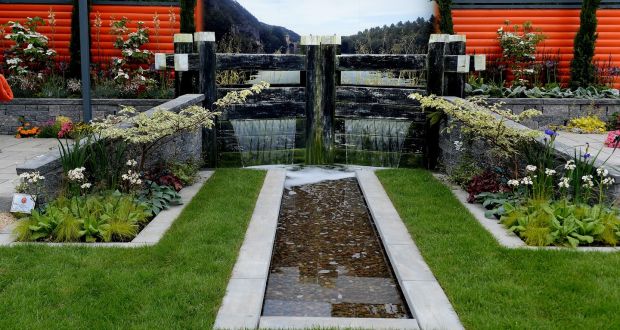 One particularly eager fan had brought a copy of the President’s book, When Ideas Matter: Speeches for an Ethical Republic, to try to get it signed by the author, without success.

The buzz around the scrum following Mr Higgins was rivalled only by RTÉ presenter Marty Morrissey, who was drawing a crowd for a special broadcast from the festival.

Among the floral displays, some of the show gardens sought to make a more political point, such as Trócaire’s display titled “Resistance”. Mr Higgins was taken by one section of the garden where an olive tree and mural of a peace wall represented the aid charity’s work in Palestine, and he said what was happening there was “heartbreaking”.

Another garden which impressed Mr Higgins, by aid charity Goal, celebrated the role of women in the developing world, who he said were “carrying the greatest burden of climate change”.

An unassuming garden on the President’s whistle-stop tour was designed for one of his close neighbours, Phoenix Park Special School. The sanctuary garden was designed as a calming outdoor classroom environment, as the primary school is for children with emotional or behavioural difficulties.

School principal Mark Swain said the students were “over the moon” to meet Mr Higgins, and he hoped to move the show garden to their school as a permanent feature.

Fianna Fáil leader Micheál Martin was one politician out on the sunny afternoon, sleeves rolled up, and shaking hands. “I enjoy flowers. In politics I don’t have the time to do it myself, but I have a next-door neighbour who is a fantastic gardener,” he said.

There were 113 awards presented to show garden designers, floral artists and amateur garden designers, selected by a panel of 14 horticultural experts. This year the festival included an artisan food market, and an inn hosting 24 craft beer producers.

1:25 'Weird, but good': Shops reopen after more than four-month lockdown