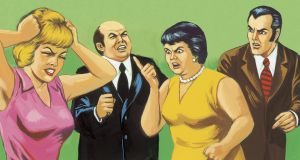 Downsizing and drink-driving are conversations sure to cause arguments at the dinner table. Photograph: Getty Images

The last big shop has been done, the stocks of embossed, three-ply toilet paper have been replenished, and everyone is primed not to mention last year, when Uncle Paudie’s take on the #MeToo movement went down as well with cousin Aoibheann as a rendition of A Nation Once Again at a DUP conference.

It’s almost time for the annual alcohol and tryptophan-fuelled get-together with the ones you love, and the ones you are forced by an unfortunate coincidence of birth or marriage to tolerate. To help you ensure that the only thing left simmering quietly in the corner is the gravy, here – in our annual peacekeeping effort – are 10 topics to be avoided around the Christmas dinner table.*

(*If you like your festive banter with a side helping of passive aggressive rage, dive right in.)

The opener “So Baby It’s Cold Outside has been banned from radio stations on the grounds that it’s a ‘date rape anthem’, Fairytale of New York is being bleeped because it’s ‘homophobic’, and nurses aren’t allowed to call patients ‘love’. And now apparently we can’t say ‘bring home the bacon’, in case it hurts pigs’ feelings. I’ve heard it all, so I have.”

The comeback “Hold your horses – sorry, I mean hold your inner contrarian, middle-aged shock jock. Not to let the facts get in the way of your indignation, but the Baby It’s Cold Outside furore involved a single radio station in Cleveland. Nobody is actually bleeping Fairytale of New York because, as Shane MacGowan has explained, the characters are not meant to be role models. I’m with you on Peta’s harebrained campaign against ‘speciesist’ sayings. No offence to hares.”

Fight factor: 4/10 We’re all in a permanent state of outrage over absolutely everything these days, but it’s unlikely any Brussels sprouts will get thrown over this one.

The opener “I think the greatest act of love any person can make for another is sacrifice. On another note, have you ever felt this generously-proportioned, four-bed semi, boasting many of its original features, might be getting too big for you?”

The comeback “Don’t start that again, you pup. I’ve told you I’m not moving out of the home I’ve lived in for 35 years, so you can go on spending your weekends in Reykjavik, eating avocado toast and drinking elderflower martinis, and waltz into a fine house like this at the end of it. Stop spending, stop nagging me about downsizing, and start saving for a deposit.”

Fight factor: 9/10 Have you ever seen The Field?

The opener “I know I’m not allowed to say this, but Trump is right on this one. If we bring back automatic citizenship for anyone born in Ireland, we’re opening the floodgates to birth tourism. We’ll have pregnant women arriving by the planeload into Dublin Airport.”

The comeback “If we want to stop the inhumane deportations of children who have lived their whole lives here, and are as Irish as breakfast rolls and good funerals, we need to stop relying on petitions to save them, and allow them to become citizens. Anyway, didn’t I see on your Facebook the petition not to deport Eric Zhi Ying Xue?”

Fight factor: 5/10 Potentially an emotive one, but hardline views tend to melt away in the face of human stories of hardship.

The opener “No turkey for me, thanks. I brought my own sugar-free, sweet potato casserole with a side of baked kale. Have I mentioned that I went gluten-free, sugar-free, oil-free, grain-free, legume-free, plant-based, hashtag-clean-eating this year, and I’m so much less bloated. Do you have any idea how much sodium and saturated fat is in that stuffing?”

The comeback “Yeah, no, you’ve actually mentioned it once or twice. Do you think you could lay off the cultish, clean eating nonsense just for one day? Food isn’t shameful. I’ll tell you what is – treating delicious, homecooked food like it’s toxic waste, when there are children starving in Yemen. You enjoy your warm cardboard stew, but spare us the lecture.”

Fight factor: 7/10 Reliably incendiary. A good rule of thumb is not to comment on other people’s dietary or lifestyle choices, particularly during a meal at which the average person is preparing to consume 6,000 calories.

The opener “It was a disgrace that the Web Summit had to uninvite Marine Le Pen this year. With your ‘no platforming’, your ‘safe spaces’, and your ‘trigger warnings’, you snowflakes want us living in a totalitarian state, where anything goes, so long as it’s 100 per cent in agreement with you.”

The comeback “The only way to deal with right-wing nutjobs and fascists is to refuse to give them a platform to spout their hatred. Anyway, how are my generation the snowflakes, when yours invented no-platforming. I don’t remember ever hearing you talk about marching in the streets against section 31 of the Broadcasting Act.”

Fight factor: 7.5/10 This isn’t merely an academic row about freedom of speech – this is an opportunity for full-scale, ideological warfare. It has been statistically proven that every use of the word ‘snowflake’ reduces the chance of your day being merry and bright by 38 per cent.

The opener “You’d think she was the first woman in history to be pregnant, the way she keeps hanging on to her bump like she’s terrified it’s going to fall off. Does she think she’s the actual Madonna? And she’s meant to be a right weapon to her staff.”

The comeback “Just so I’m clear, when you saw she’s ‘meant to be’, you mean you read it on Mail Online? With the Brexit car crash, and the Trump sh*tshow, and the planet only having about 20 good years before it turns into Mars, you’d think you might have bigger things to worry about than Meghan Markle’s bump.”

The interjection “Sorry, Meghan who now?”

Fight factor: 6/10 It’s hard to imagine anyone getting that worked up about the perfectly likeable Meghan Markle’s perfectly normal pregnancy, but they do. Oh, they do. Meanwhile, there’s always one who pretends not to know who you’re talking about.

The opener “I’ve been meaning to ask. What’s with all the bottles of Persil and tins of chocolate Kimberleys in the spare room wardrobe? Don’t tell me you’re taking all that fear mongering about stockpiling for a hard Brexit seriously.”

The comeback “You can smirk all you want, but that grin will be on the other side of your face when you’re living on potatoes and soda bread and nettle soup, and washing your clothes in the river. Britain might be collapsing, the EU might be about to fall apart, but there’s no fear of a hard Brexit in this house. And you needn’t come crying to me for a few tea bags, because you won’t get them.”

Fight factor: 2/10 As long as Uncle Trevor, everyone’s favourite closet Ukip voter, isn’t joining you, this is probably an occasion for a gentle slagging rather than a full-on festive cage fight.

The opener “Go on, you might as well top me up too. I’ve plenty of soakage in me and I’ve driven in a much worse state than this in my time. And sure there’ll be no guards out on a night like this.”

The comeback “I don’t think so. One pint is enough to put you over the limit now, and if you’re caught, you’re off the road for three months. I don’t really think the fact that you’ve driven in a worse state than this is something to be bragging about either.”

Fight factor: 9.5/10 The one exception to the rule about not commenting on other people’s diet or lifestyle choices. You won’t be popular, but you’ve got a moral obligation not to tread carefully here.

The opener: “So, Lisa, we hear you’re from down the country. We love down the country, don’t we Brian? We went there once for a wedding. Still, you must be so much happier living in Dublin now, near proper shops, decent schools, nice people and all those trendy new gourmet doughnut places.”

The comeback “How lovely. Did you go anywhere in particular, or did it all just blend into a single, amorphous blur of cows and Applegreen stations? Frankly, I don’t love living in Dublin, with its ridiculous rents and obsession with where you went to school. I don’t even eat doughnuts. Actually, we’ve been meaning to mention, as soon as we get engaged, we’ll be putting in for planning permission down home.”

Fight factor: 6/10 Potentially touchy on two counts. 1) Irish people get very territorial if they sense their corner of the island is being patronised. 2) Christmas Day is not the best moment for announcements beginning with the words “Actually, we’ve been meaning to mention...”

The opener “The only dinners I’ve made this year involve Rice Krispies or freeze-dried ramen. I still haven’t figured out the washing machine. I spend all my time worrying about money, and then when I finally get some I have to buy myself a treat to feel better, and then I’m back to square one. Adulting is hard.”

The comeback “In my day, growing up wasn’t an optional life choice, it was something that just happened when you turned 18, and you were expected to start paying rent. You’re 38 – when are you going to cop on to yourself and stop being so useless? Bring down your washing after lunch and I’ll put it on for you.”

Fight factor: 1/10 She might love to complain about her offspring’s shortcomings, but she’s secretly pleased they can’t seem to cope without her. Not much potential for genuine conflict here.