Behind the scenes at the shopfront: how to make a business look busy 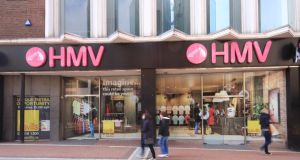 Underneath the HMV sign on the front of the former music shop at the top of Grafton Street in Dublin is what looks like a functioning men’s clothing store. It’s actually a series of photorealistic vinyl images of a men’s clothing store. Within the shop, customers appear to be perusing racks of clothes, all overseen by a slightly bored-looking virtual shop assistant.

In its realism – I know this isn’t an art review but “bored shop girl” is a triumph – it’s a long way from the aspirational images of high living that surrounded boom-time apartment buildings. It’s the work of Virtual Shopfronts, whose owner, Nicholas Polley, believes his company’s products help bring life back to depressed retail areas.

“When the recession hit we had to think on our feet. I saw a problem – vacant retail units – and thought of a way to help address that problem . . . You go to our library, virtual-shopfronts.com, choose the images you want and we’ll modify them to fit.

“We’ve installed them all around the country: in Portlaoise, Cork, Dundalk and Drogheda.”

He says there has been interest from the Netherlands, the UK and the US. The main objective is to help let empty premises, but Polley also believes it brightens up depressed areas. “When you have a vacant unit, it has a detrimental effect on neighbouring units,” he says.

Others find it fake, however. In June, in advance of the G8 summit in Northern Ireland, local officials were criticised for decorating empty retail space in the Enniskillen area in a similar way. These virtual shopfronts were not done by Polley’s company, but he’s aware that some people feel it’s misleading. “I say it’s a hell of a lot better than having [what looks like] a vacant unit . . . We’re not just painting over the cracks: we’re bringing positivity back to something very negative.”