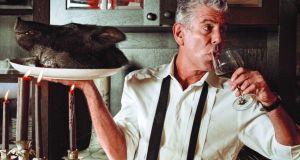 Anthony Bourdain: “While it is a laudable ambition to prepare the best risotto in the world, that doesn’t mean shit if your guests are sitting around with their stomachs growling.”

What happens when bad-ass chef, writer and travel show presenter Anthony Bourdain becomes a father, at the age of 50? Something’s got to give, so in addition to ditching the cigarettes (a two-pack-a-day habit), the birth of his daughter Ariane in 2007 also heralded a decade long hiatus in Bourdain’s book publishing career.

TV took over and since 2002 Bourdain has spent the greater part of every year on an aircraft, criss-crossing the globe in search of great things to eat, and the people who make, sell and eat them. He has presented food travel shows on Food Network, The Travel Channel and, since 2013, CNN. “I travel for a living,” he says. In September, an episode was screened which showed him slurping noodles in a back street joint in Hanoi with US president Barack Obama

But now he’s back in literary land, and it’s with, guess what, a family cookbook dedicated to his daughter and her pal. However, Appetites: A Cookbook, with its Ralph Steadman artwork on the cover and its edgy photography, is as non-conformist as its author.

Eschewing the soft focus, pretty pictures cookbook template, this one’s full of slightly disturbing images – though whether the photograph of the author eating a messy sandwich while sitting on the loo is more or less stomach-churning than, say, the recurring chicken head, feet and entrails images, is open to debate. An adult content language warning, some might argue, also wouldn’t go astray.

What’s beyond debate, however, is the quality of Bourdain’s writing, which is as brilliantly pithy and witty as ever. “The smell of breakfast to me will always be the smell of defeat,” he writes, acknowledging that his brunch cook days were not the acme of his culinary career. “I’ll drink a Coke only in the service of fighting the effect of a hangover and in the company of superspicy Kung Pao chicken. It’s a wholly unnecessary category of beverage for all other occasions.” 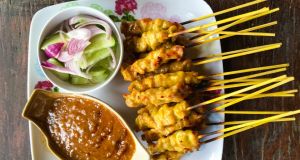 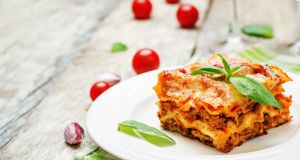 Since writing the book, Bourdain and Ottavia Busia, his wife of nine years, have parted ways, amicably, they both say. Which makes reading his reference in the book to their three jiujitsu uniforms (“Mom, Dad, and girl”) hanging up to dry side by side, the many references to “my wife” and the recurring images of Busia, a touch wistful.

But don’t wallow in it; they’re certainly not. Instead, pull out this book, get stuck into the chapter on Thanksgiving, a marathon three-day affair Bourdain-style involving a “stunt turkey” as well as a “business turkey” – and remember that family comes in many forms.

Anthony Bourdain: "It's laudable to prepare the best risotto in the world, that doesn’t mean sh*t if your guests are sitting around with their stomachs growling"

In this extract from his latest book, ‘Appetites’, the American chef cooks at home

These are the dishes I like to eat and that I like to feed my family and friends. They are the recipes that “work,” meaning they’ve been developed over time and have been informed by repetition and long – and often painful – experience. As happens in the restaurant business, I will, from time to time, make small incremental sacrifices in “quality” for the often more important matter of serviceability.

While it is a laudable ambition to prepare the best risotto in the world, that doesn’t mean shit if your guests are sitting around with their stomachs growling, getting progressively drunker, while you dick around in the kitchen, interminably stirring rice. Fish served on the bone is admittedly “better”. You, uncertain of your knife skills, struggling to lift a fillet from a cooked Dover sole, tableside, in front of eight guests, might not be.

There is nothing remotely innovative about the recipes in this book. If you are looking for a culinary genius to take you to the Promised Land of next-level creativity, look elsewhere. That ain’t me. Mostly, these recipes are direct lifts from imperfect memories of childhood favourites: things my mom fed me, things I liked or loved to eat during the happier moments of my life – the kind of food memories I like to share with my daughter – along with a few greatest hits from my travels, and some boiled-down wisdom on subjects like breakfasts and Thanksgiving dinner, presented in an organized and tactically efficient, stress-free way.

One of the first things I discovered as I transitioned into my new “Daddy” phase was that I was usually more frantic preparing a dinner party for five friends at home than I was cranking out five hundred à la carte dinners in a restaurant. The remedy for this anxiety, I’ve found, is to treat my friends or family just like another five-top in a sea of customers-until the food is served. Then I can sit down with them, relax, and enjoy their company. Just like a “normal” dad. Extracted from Appetites, by Anthony Bourdain, with Laurie Woolever, published by Bloomsbury (£26), with photographs by Bobby Fisher

Join Donal on his culinary tour of the world, from London to LA, Bangkok to Berlin. Enjoy the wide variety of recipes and ideas from his travels, with exciting flavours and accessible ingredients for you to cook at home.